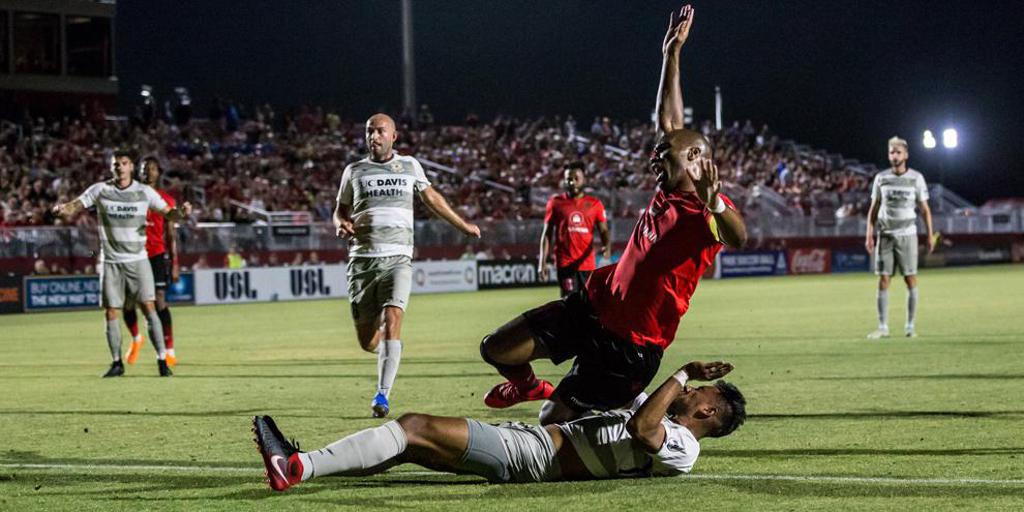 PHOENIX (May 19, 2018) — Phoenix Rising FC forward Chris Cortez added to his team-leaing goal tally in 2018 but it wasn't enough in a 3-1 loss to Sacramento Republic FC in front of a sellout crowd of 6,503. It was the fifth time in six home matches the club has played in front of a sold out crowd.

Cortez's goal came in the 62nd minute with the club down 2-0. Teammate Soloman Asante centered a pass toward the top center of the box and Cortez slammed it past the keeper and inside the right goalpost to make it 2-1 and give the club a lift.

But the momentum didn't carry over and after several missed oportunities, Sacramento Republic put the game away with a Wilson Kneeshaw goal to make it 3-1.

Sacramento opened the scoring early, netting the match's first goal in the 8th minute thanks to Cameron Iwasa. The club doubled it's lead in the 21st minute with a Villyan Bijev goal to make it 2-0.

Prior to the match, Phoenix Rising Club Governor Berke Bakay honored Didier Drogba for playing in 500 career league matches. The Chelsea and Ivory Coast legend was presened with a Phoenix Rising jersey with the number 500 on the back under Drogba's name.

Phoenix Rising heads back on the road for three consecutive matches. Its next road match will be Saturday, May 26, at Swope Park. The match will kick off at 2 p.m. Arizona time.