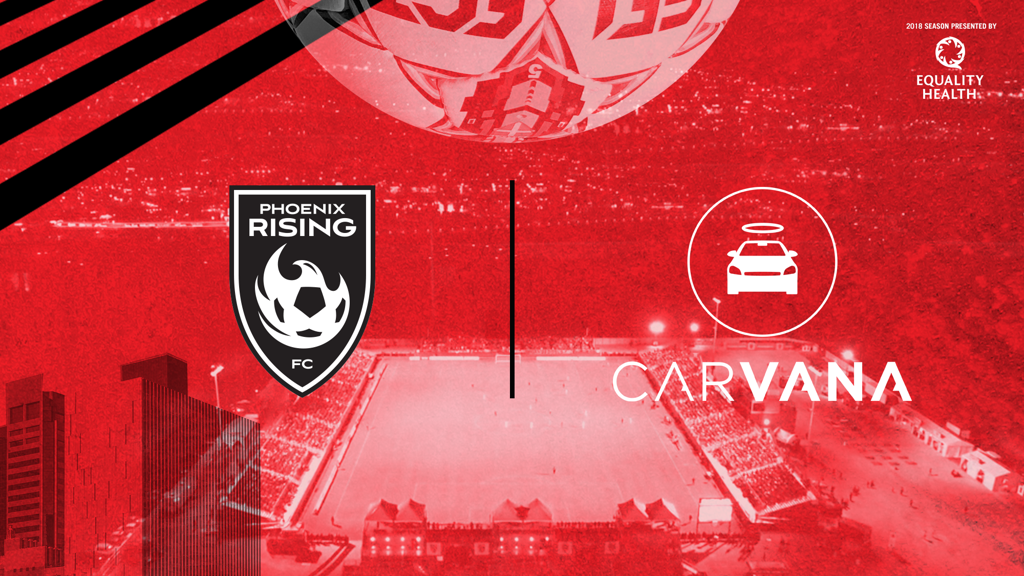 (PHOENIX) March. 9, 2018 – Phoenix Rising FC and Carvana, a leading eCommerce platform for buying used cars, announced today a multi-year contract naming Carvana as the new front of jersey sponsor for the 2018-2020 seasons. Carvana’s logo will first appear on the front of the jerseys at the season opener at Orange County SC on Saturday, March 17.

“We are honored to be partnering with such an innovative and forward-thinking company such as Carvana,” said Bobby Dulle, Chief Operating Officer for Phoenix Rising FC. “Their business philosophy is a lot like ours, and we are both in rapid growth phases, so it is a perfect partnership. We also love that they are a locally headquartered company looking for new ways to connect with our community.”

The partnership between Carvana and Phoenix Rising FC includes a number of activations and collaborations, including a Carvana car giveaway at the May 4 Phoenix Rising FC vs. LA Galaxy II match. The May 4 match is also a “blackout" night where fans are encouraged to wear black to the game and the first 3,000 fans will receive a black Phoenix Rising T-shirt provided by Carvana. Within the stadium, Carvana will be featured on prominent signage, as well as host a branded Carvana Corner.

“Carvana is proud to be headquartered in Phoenix, so partnering with Phoenix Rising FC as they make their mark in the Valley of the Sun is exciting,” said Ryan Keeton, Carvana co-founder and chief brand officer. “Both of our organizations aim to deliver an incredible experience, whether for fans or for customers. Now, as partners, fulfilling that promise together is even more meaningful.”

Phoenix Rising FC will unveil the three new 2018 Macron uniforms with Carvana’s logo tonight at Marquee Theatre in Tempe. The event is open to the public and will include a fashion show, live DJ, drink specials and emcees Rico Hernandez from El Patron Radio and Kenny and Crash from Fox Sports 910 AM. Doors open at 6 p.m. and the event starts at 7 p.m. Fans will also be able to purchase the new jerseys, along with other team-related merchandise.

About Carvana (NYSE: CVNA)
Founded in 2012 and based in Phoenix, Carvana’s (NYSE: CVNA) mission is to change the way people buy cars. By removing the traditional dealership infrastructure and replacing it with technology and exceptional customer service, Carvana offers consumers an intuitive and convenient online automotive retail platform. Carvana.com enables consumers to quickly and easily buy a car online, including finding their preferred vehicle, qualifying for financing, getting a trade-in value, signing contracts, and receiving delivery or pickup of the vehicle from one of Carvana’s proprietary automated Car Vending Machines.  For further information on Carvana, please visit www.carvana.com, or connect with us on Facebook, Instagram or Twitter.