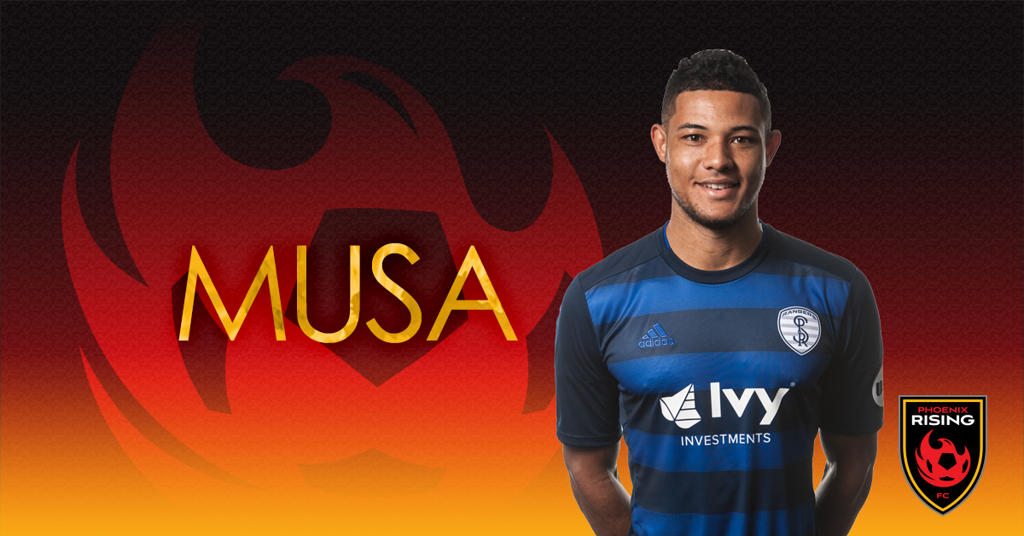 PHOENIX (March 1, 2018) — Phoenix Rising FC announced today it has signed midfielder James Musa. The 25-year old spent last season in Major League Soccer Sporting KC’s system initially signing with its USL affiliate Swope Park Rangers and would be promoted to the first team in August 2017 making his MLS debut against the Seattle Sounders days later. Musa would start 25 games in all competitions and 2017 accolades include winning the 2017 US Open Cup, the Swope Park MVP Award and the USL Western Conference Championship.

“I am honored to have joined Phoenix Rising FC after watching closely the club’s evolution over the past few seasons on and off the field,” remarked Musa. “Phoenix Rising FC was always one of the more difficult opponents and hope that my experience and qualities will help the club earn trophies this season and beyond. The Club’s first-class ownership, training facilities, coaching staff, front office and roster quality as well as a chance to play in front of a packed stadium were all huge factors in my decision. I have one thing in mind this year and that is lifting the USL Final Trophy and cannot wait to join the group to get started on this new challenge.”

Over the course of his career, Musa has played professionally in Australia, New Zealand, England, and the United States. In 2015, Musa made his first USL appearance with Saint Louis FC, appearing in 54 matches over the 2015 and 2016 seasons, which included a brief spell in between seasons on loan with Team Wellington.

Internationally, Musa has appeared with the U20, U23, and senior national squads for New Zealand. He’s appeared in the 2011 FIFA U-20 World Cup and the 2012 Summer Olympics in addition to three caps with the senior national team. His most recent appearance came in September. He played 26 minutes in a 6-1 first-leg victory over Solomon Islands in the OFC Final Playoff. He played 13 minutes in a 2-2 second-leg draw as New Zealand won the tie 8-3 on aggregate to advance to November's World Cup playoff.

Including Musa, the club now has 25 players signed to the Roster for 2018. Musa will wear the number 41.

About Phoenix Rising FC
Phoenix Rising FC is the highest-level professional soccer franchise in Arizona’s history. Legendary Chelsea and Ivory Coast striker Didier Drogba, Kona Grill CEO Berke Bakay, International Entrepreneur Alex Zheng, and an impressive collection of business leaders and international celebrities own the club. Established in 2013, Phoenix Rising FC is one of 11 cities applying for Major League Soccer expansion. The club currently plays in the United Soccer League, the largest Division 2 professional league in the world. In October 2017, Phoenix Rising FC acquired Premier Development League (PDL) side FC Tucson as part of its long-term plan to develop professional players for its franchise.  The club is also hosting the largest MLS Preseason event ever, the 2018 Mobile Mini Sun Cup. Fans may purchase tickets for the Mobile Mini Sun Cup at PHXRisingFC.com. The 2018 Season is presented by Equality Health. For more information about the club, visit the team's website at PhxRisingFC.com. You can also follow the team on Facebook (PHXRisingFC), Twitter (@PHXRisingFC), Instagram (@PHXRisingFC), Snapchat (PHXRisingFC) and YouTube (PhoenixRisingFootballClub). For season tickets call (602.900.0083) or visit PHXRisingFC.com.