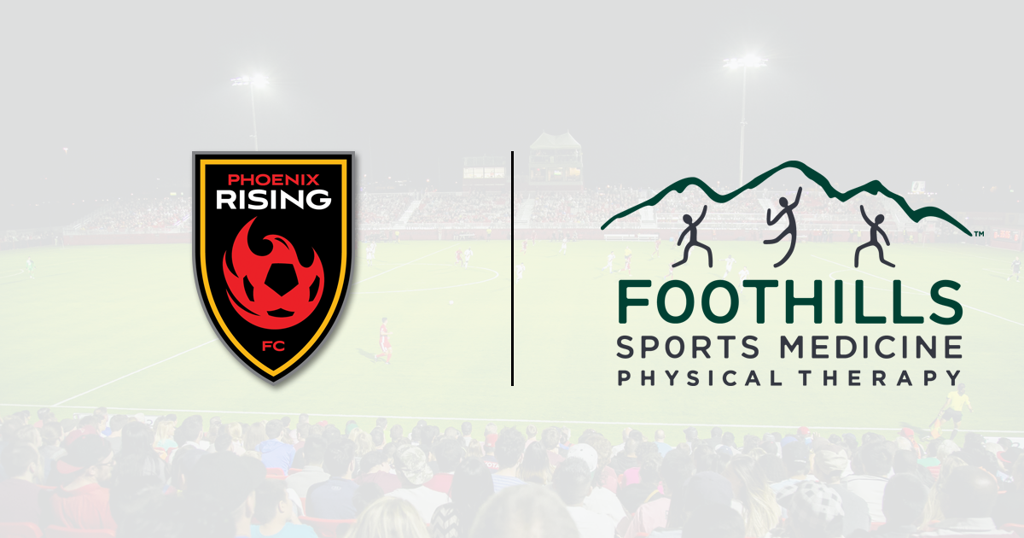 “Foothills Sports Medicine Physical Therapy strives to be the best in their field and that matches with our mission to be the best in our league,” said Phoenix Rising Club Governor Berke Bakay. “A winning franchise is more than just the players and coaches and Foothills’ staff will keep our players in top shape every time we hit the pitch.

Recognized for outstanding quality care and customer service, Foothills has been honored to receive a ‘Best of Arizona’ ranking multiple times, and was recognized in 2016 by ADVANCE Rehab Magazine as one of the Top 3 ‘Best Physical Therapy’ practices in the nation. Giving back to the community is a large part of their mission as an organization, supporting local organizations/initiatives such as: Phoenix Rescue Mission, American Cancer Society, Arthritis Foundation, Cards for Kids, Ability360, Ryan House, Feed My Starving Children and many more. Foothills believes their efforts need to extend beyond the walls of our clinics and into the community by being involved in extensive sports medicine outreach at youth, amateur or professional levels

“An affiliation with the Phoenix Rising has been on our radar for some time, and on behalf of the entire Foothills team, we are thrilled to be entering into this partnership,” said Chief Executive Officer Mike Basten, PT, DPT. “Foothills Sports Medicine Physical Therapy has its foundation in working with athletes, both at a professional and amateur level, and we believe this relationship will further our mission to be involved in the community.”

Added Chief Experience officer Bruce Watson, PT: “We welcome the opportunity to partner with the Phoenix Rising Football Club to care for their athletes. We believe physical therapists, athletic trainers, physicians and club leadership working together on injury prevention, athletic performance and recovery from injury is the gold standard, whether for professional or amateur athletes.”

About Phoenix Rising FC
Phoenix Rising FC is the highest-level professional soccer franchise in Arizona’s history. Legendary Chelsea and Ivory Coast striker Didier Drogba, Kona Grill CEO Berke Bakay and an impressive collection of business leaders and international celebrities, own the club. Established in 2013, Phoenix Rising FC is one of 12 cities applying for Major League Soccer expansion. In October 2017, Phoenix Rising FC acquired Premier Development League (PDL) side FC Tucson. The club currently plays in the United Soccer League, the largest Division 2 professional league in the world. The club is also hosting the largest MLS Preseason event ever, the 2018 Mobile Mini Sun Cup. Fans who want to purchase tickets for the Mobile Mini Cun Cup can go to PHXRisingFC.com. The 2018 Season is presented by Equality Health. For more information about the club, visit the team's website atPhxRisingFC.com. You can also follow the team on Facebook (PHXRisingFC), Twitter (@PHXRisingFC), Instagram (@PHXRisingFC), Snapchat (PHXRisingFC) and YouTube (PhoenixRisingFootballClub). For season tickets call (602.900.0083) or visit PHXRisingFC.com.