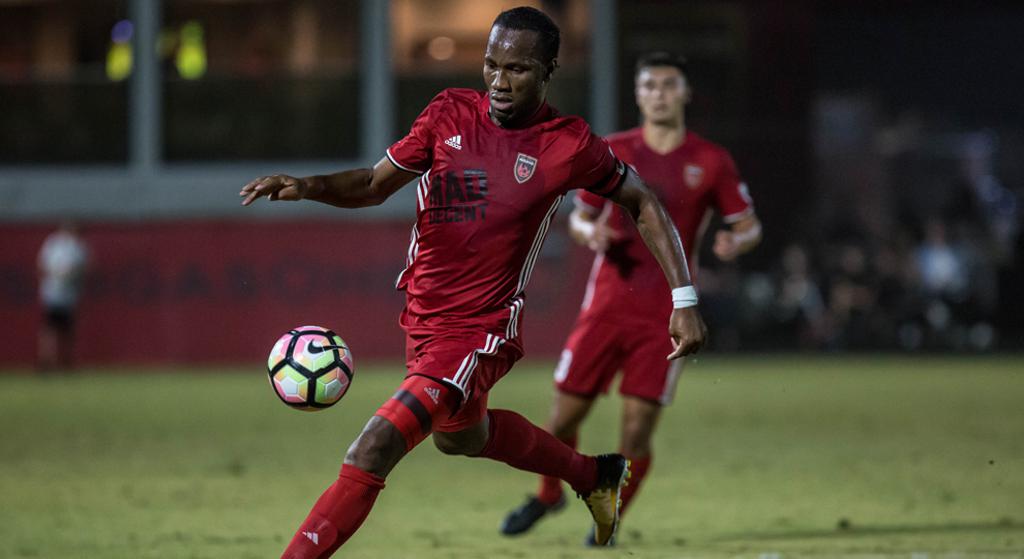 Didier Drogba keeps his eye on the ball during a match against Portland Timbers 2 (Michael Rincon/PHXRisingFC.com)

PHOENIX (January 18, 2018) — Phoenix Rising FC announced today an additional preseason match against Ecuadorian powerhouse L.D.U. Quito on Feb. 28 at their home stadium in Ecuador. The club will also train in Ecuador from Feb. 25 to Mar. 3, 2018 at the official Ecuadorian National Team training complex.

L.D.U. Quito is one of the most prestigious clubs in Ecuador, winning nine regional titles and 10 national titles (the last one in 2015) since it first became a professional club in 1954. The club is also the only Ecuadorian team to win the Copa Libertadores (2008), Copa Sudamericana (2009) and the Recopa
Sudemericana (2009 and 2010). In 2008, L.D.U. Quito finished second in the FIFA Club World Cup, falling to Manchester United 1-0 in the final.

The match will be played at Estadio Rodrigo Paz Delgado, formerly known as “Casa Blanca”, the stadium received it´s official name on 2017 on the commemoration of the 20th anniversary since it was first opened on 1997. The stadium has hosted two World Cup qualifiers for the Ecuadorian National Team, where Ecuador won both of its matches.

About Phoenix Rising FC
Phoenix Rising FC is the highest-level professional soccer franchise in Arizona’s history. The club is owned by legendary Chelsea and Ivory Coast striker Didier Drogba, Kona Grill CEO Berke Bakay and an impressive collection of business leaders and international celebrities. Established in 2013, Phoenix Rising FC is one of 12 cities applying for Major League Soccer expansion. In October 2017, Phoenix Rising FC acquired Premier Development League (PDL) side FC Tucson. The club currently plays in the United Soccer League, the largest Division 2 professional league in the world. The club is also hosting the largest MLS Preseason event ever, the 2018 Mobile Mini Sun Cup. Fans who want to purchase tickets for the Mobile Mini Cun Cup can go to PHXRisingFC.com. The 2018 Season is presented by Equality Health. For more information about the club, visit the team's website at PhxRisingFC.com. You can also follow the team on Facebook (PHXRisingFC), Twitter (@PHXRisingFC), Instagram (@PHXRisingFC), Snapchat (PHXRisingFC) and YouTube (PhoenixRisingFootballClub). For season tickets call (602.900.0083) or visit PHXRisingFC.com.