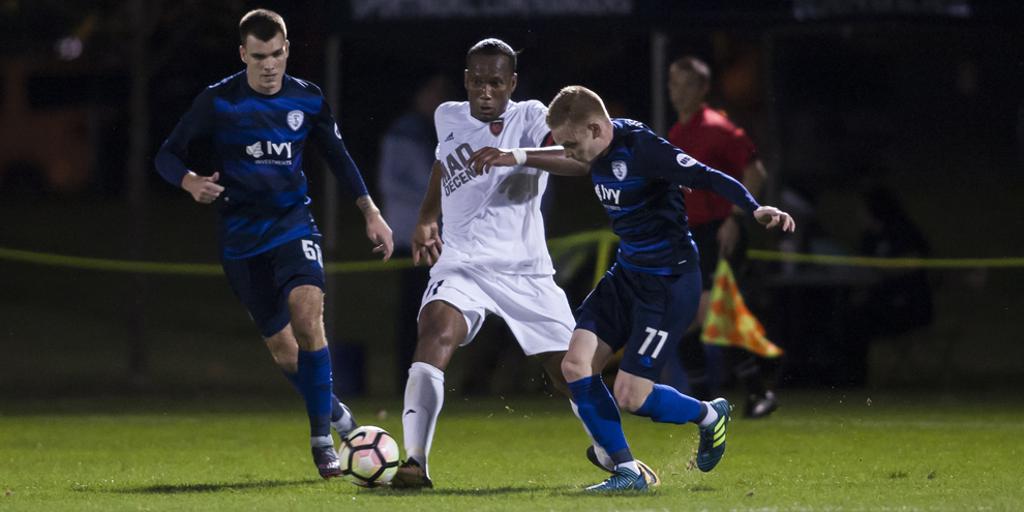 (October 22, 2017) — After a long weather delay that pushed its first playoff match into a second day, extra time and penalty kicks, Phoenix Rising FC’s season came to an end in a loss to Swope Park Rangers,  4-2 in penalties.

Phoenix Rising and Swope Park Rangers played a 0-0 first half in their First Round USL Playoff match on Saturday night at the Children’s Mercy Victory Field but were forced to delay the second half until Sunday because of inclement weather.

After a scoreless second half, Phoenix Rising got on the board first in the first of two 15-minute extra time frames. It was Didier Drogba who scored the first playoff goal in club history.

Drogba’s goal started with an Alessandro Riggi free kick from midfield. Riggi, an extra-time substitute, launched the ball into the box. Drogba expertly flicked a header over the charging goalkeeper and into the goal in the 99th minute.

But ten minutes later, Swope Park scored its equalizer. A cross put into the Phoenix Rising box was headed into the air by Swope Park attacker Kharlton Belmar. Rangers defender Amer Didic was first to the ball and jumped up to head it again, this time past a diving Rising FC goalkeeper Josh Cohen and into the upper corner of the net.

In the penalty kick shootout, Swope Park made all four of their kicks, while Rising FC made just two of its four kicks, eliminating the need for a fifth penalty kick.

Phoenix Rising winger Amadou Dia came within inches of putting the club in front in the 67th minute, but his sharp-angle shot from inside the box was deflected by MacLeod and glanced just wide of the post.

In extra time, Drogba nearly won the game for Phoenix Rising with a free kick in the 113th minute. Drogba smashed the ball with his right foot for the left upper corner of the net. But MacLeod was able to get a hand to it to send it over the bar.

Cohen made a couple crucial saves to get the match into extra time. In the 77th minute, Belmar tested the Rising FC goalkeeper with a close-range shot from the edge of the six-yard box, but Cohen was well-positioned and made the save. Near the end of regulation, Cohen was called into action again, getting low to his left to keep out a long-range shot from Nansel Selbol.

Phoenix Rising FC ends 2017 with 17-8-7 record in the regular season. The club broke regular season records for wins (17), points (58), and goals scored (51). This was also the club’s first-ever playoff appearance.