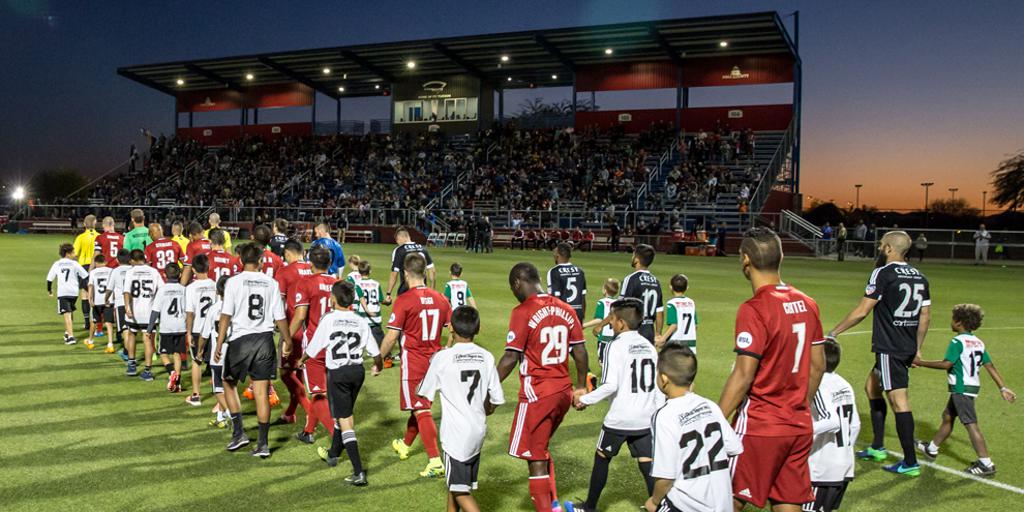 Players walk onto the pitch prior to a friendly between the two clubs earlier in the season. (Michael Rincon/PHXRisingFC.com)

PDL club among the best in the country

“This is a new and exciting chapter for soccer in the state of Arizona,” said Phoenix Rising FC Club Governor Berke Bakay. “From day one, we wanted to help elevate the game in our state and that begins with investing at all levels. By acquiring FC Tucson, in addition to our partnership with Arizona Youth Soccer Association, we believe we’re building a pipeline from the youth level to the professional level that will rival other states in the country.”

FC Tucson was established in 2010 and began play in the PDL in 2011. In its six-year history, the club has won four division titles and has reached the Western Conference finals three times. Phoenix Rising FC assistant coach Rick Schantz was the head coach of the club for its first five seasons, compiling a 71-22-17 record and winning three consecutive division titles. He also led the club to the third round of the 2013 U.S. Open Cup, where the club gained national notoriety for beating two professional clubs before being eliminated by MLS side Houston Dynamo.

Phoenix Rising FC co-owner and Tucson native Dr. Mark Leber added, “Having been raised in Tucson and as a soccer fanatic, I’m excited to continue growing the vibrant soccer community that’s been there and has grown with the success of FC Tucson. Tucson has a tight-knit community feel within a large city, and FC Tucson contributes to that civic pride and is an organization that wants to give back to our soccer community and the community at large. Phoenix Rising FC will provide even more resources to FC Tucson in an effort to expand its wonderful impact across southern Arizona.”

Last season, FC Tucson won the PDL Mountain Division with a 9-2-3 record and reached the playoffs before falling in the conference semifinals to Fresno Fuego.

Current FC Tucson General Manager, Jon Pearlman, will remain with the club and carry on his day-to-day duties in the front office.  “When I co-founded FC Tucson with my managing partners, our goal was to help give players in the state a road map toward playing soccer at the highest levels,” Pearlman said. “Our original mission fits perfectly with what we’re doing with Phoenix Rising and this partnership is going to raise the level of soccer in Arizona for years to come.”

About FC Tucson
FC Tucson, established in 2010, is committed to bringing the highest caliber of competitive soccer to Tucson and establishing a successful and long-lasting source of pride for city,county,state and country. FC Tucson owns FC Tucson Soccer, Tucson’s top-level soccer team and the FC Tucson Desert Diamond Cup, a Major League Soccer preseason tournament.  Our owners, coaches, players and staff will play to win in sport, business and community connection. We recognize that our quality, commitment and passion for the game will guide our success and establish deep bonds with our stakeholders as we strive to be recognized and respected locally, nationally and internationally. In 2012, FC Tucson was named the PDL Rookie Franchise of the Year. To stay up to date on what is going on with the FC Tucson Desert Diamond Cup, check out the team’s website at www.fctucson.com. You can also visit the team’s Facebook page at www.facebook.com/FCTUCSON and follow all of the news related to FC Tucson on Twitter at www.twitter.com/FCTucson.