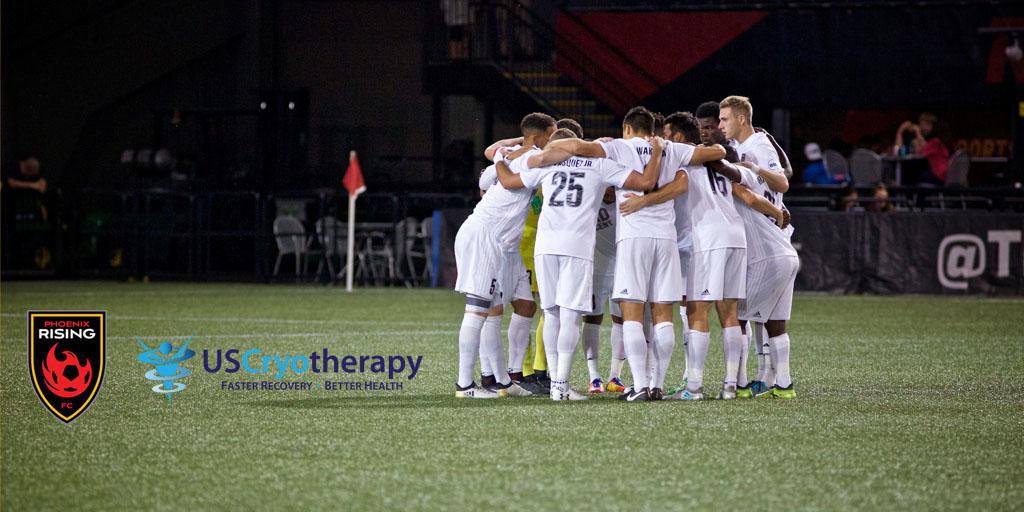 “Recovery is key to the players’ success on the pitch and with the help of U.S. Cryotherapy, our players are returning to the pitch in the best possible shape,” said Phoenix Rising FC Head Coach Patrice Carteron. “We’re always making sure to take care of our players so that they can be at their best on match day.”

Added Goalkeeper Carl Woszczynski: “I love our partnership with U.S. Cryotherapy. I think it’s really helped me get back to training quicker than I would’ve without it. Nobody likes to be injured or sore so I’m definitely appreciative of it. It’s cutting-edge technology and Phoenix Rising is lucky to be a part if it.”

The U.S Cryotherapy cold air therapy wellness center in Scottsdale (14747 N. Northsight Blvd # 108) offers a unique new way to cool and heal a person's body. Whole Body Cryotherapy (WBC) offered by US Cryotherapy is exposure to subzero temperatures in a walk-in chamber environment using refrigerated cold air with no use of liquid nitrogen. The entire body is exposed (including chest, neck, and head during the short duration session). Extreme cold stimulates skin sensors, activating a Central Nervous System (CNS) response, which causes the release of endorphins, the body's natural pain inhibitors and mood elevators, and can accelerate recovery benefits while elevating mood and energy.

"We are excited to add another elite professional sports partner to help enhance recoveries and keep players on the field at their best", stated Kevin Kramer, US Cryotherapy's CEO. "With 20 treatment centers nationwide, we have added these types of team partnerships around the country with the NFL Alumni Association, many NCAA and professional sports teams. Player capital is of the utmost importance, complete outcomes, safety, and a full compliment of recovery modalities offered at US Cryotherapy centers are second to none in the industry. The elite professionals and general public are utilizing these centers because we are refrigeration based technology offering the only True Whole Body Cryotherapy systems", concluded Kramer. "That means no gas, no forced air burns, no inhalation issues that you see with nitrogen competitors".

About US Cryotherapy
US Cryotherapy™ is a cold air therapy & equipment company based in the Sacramento, CA area. They operate Company owned wellness and recovery centers in Roseville and Davis, CA, Scottsdale AZ, and Redondo Beach CA (at Velocity Sports Performance) opening at the end of February 2017.  The Franchising Division currently has 8 open locations with various new centers opening around the country throughout 2017. US Cryotherapy introduced Whole Body Cryotherapy (WBC) to the United States creating the market in 2011, was the first and remains the only company offeringwhole body, walk-in chamber therapy using no liquid nitrogen for cooling. The C4 systems accommodate up to four people in the chamber per session and are all-electric refrigerated cold fresh air. There are documented advantages in areas of: safety, outcomes, and convenience using US Cryotherapy equipment. US Cryotherapy has become a global leader in WBC having administered more than 500,000 treatments since 2011 in multiple locations throughout the US, averaging an estimated 10,000 customer visits per month across the US and growing, with exceptional safety, service, and customer experience reviews. US Cryotherapy manufactures its proprietary equipment in the US and directly sells equipment to various independent medical groups, sports teams, NCAA, and for home use as well.

For more information regarding US Cryotherapy, contact Kevin Kramer – CEO, at kkramer@uscryotherapy.com, or call 707-301-7690