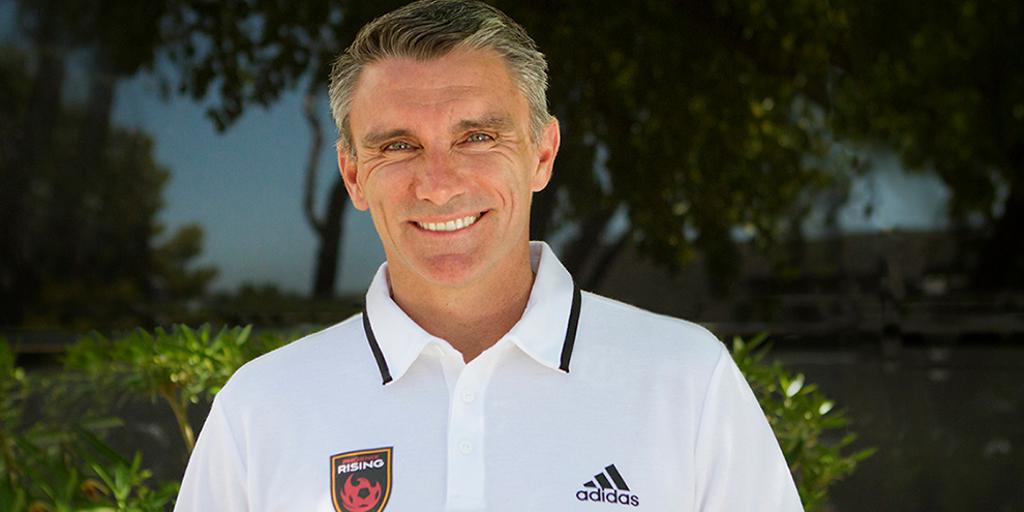 Beginning his head-coaching career for AS Cannes, Carteron has achieved tremendous success during his eleven years as a manager.  Under his leadership:

“Bringing Patrice Carteron to Phoenix Rising FC is another tremendous achievement for professional soccer in the United States,” said Phoenix Rising FC Governor Berke Bakay.  “His holistic approach to the game combines a unique blend of strategy, wellness, and uncompromising competitiveness.  Patrice will bring the very best performance out of our players and nourish a new soccer culture for youth development in cooperation with our affiliate youth clubs throughout Arizona.”

Prior to his career as a head coach, Carteron played at the highest levels of soccer in Europe.  During his 16-year career as a player, he performed in 416 matches and scored 31 goals.  Twice, Division 1 of the French Premier League named him “Defensive Right Back Player of the Year.”

“Although I have many opportunities to continue coaching in the top leagues of Europe, I believe coming to Phoenix Rising FC will be the start of an historic story,” said new Head Coach of Phoenix Rising FC Patrice Carteron.  “I am very impressed by the project and have a fantastic feeling about the ownership group, coaching staff and new stadium atmosphere.  My heart told me to pour my efforts into Phoenix Rising.”

Phoenix Rising FC will return to Phoenix from its current road trip for a third round U.S. Soccer Open Cup match against San Francisco Deltas on May 31st at Phoenix Rising FC Stadium.  The match will kick off at 7:30pm. Tickets are still available and can be purchased at www.PHXRisingFC.com.

About Phoenix Rising FC
Phoenix Rising FC is the highest-level professional soccer franchise in Arizona’s history. Established in 2013, the club enters its fourth year in the United Soccer League, which has been awarded Division 2 status by the U.S. Soccer Federation. Major League Soccer (MLS) recently announced Phoenix Rising FC as among 12 applicants being considered for a MLS Expansion Franchise. All five of Phoenix Rising FC’s home matches that have occurred so far during the 2017 season were played before a sold-out, standing room only crowd in its new, soccer-specific stadium located at the northwest corner of the 101 and 202 freeways in south Scottsdale.  For more information about the club, visit the team's website at PhxRisingFC.com. You can also follow the team on Facebook (PHXRisingFC), Twitter (@PHXRisingFC), Instagram (@PHXRisingFC), Snapchat (PHXRisingFC) and YouTube (PhoenixRisingFootballClub). For season tickets or single-game tickets call (623) 594-9606 or visit PHXRisingFC.com.

Headquartered in Tampa, Fla., the USL provides unparalleled club support with a growing team of 50 professionals across 17 departments, ranging from operations to marketing, communications and sponsorship. Follow the USL at USLSoccer.com, the USL Match Center, and on social media via Twitter, Facebook and Instagram.