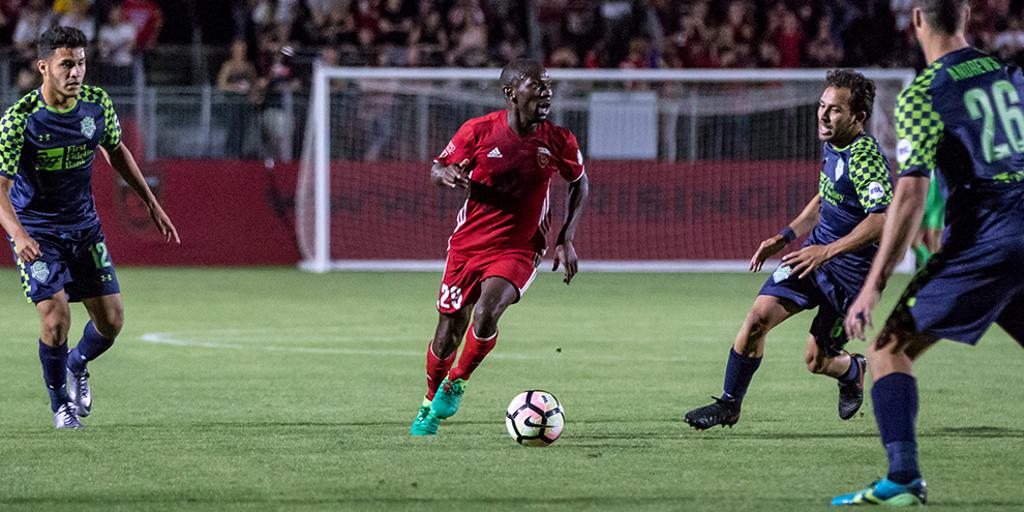 PHOENIX (May 13, 2017) — With stoppage time winding down and Phoenix Rising FC headed for a disappointing draw, midfielder Shaun Wright-Phillips received a pass near the top of the box, took a light touch to his right, and then fired the final shot of the match into the back of the net to send the crowd of 6,259 fans into a frenzy.

“I was so fortunate to be where I was sitting because I could see (the shot) perfect and I’ve seen him do that many times in training and many times in the EPL,” sad Interim Head Coach Rick Schantz.

Prior to the final 2-1 score, Phoenix Rising FC appeared headed for a deflating draw. Clinging to a 1-0 lead, defender JJ Greer Jr was called for a penalty, extending a much-needed life line for Energy FC.  Kyle Hyland buried the shot from the spot to equalize at 1-1. One minute later, Wright-Phillips sent the capacity crowd home with smiles on their faces

“Since I was a kid, Kevin Keegan…always said to me shoot across the face of the goal because if the keeper saves it he parries it into someone’s path so when I’m when that side I always go back across,” Wright-Phillips said. “I don’t think he saw it which benefited me, so he just stood still which is perfect for us in the dying seconds.”

Phoenix Rising went up 1-0 in the 50th minute of the match. Forward Jason Johnson, who was subbed into the match for an injured Alessandro Riggi, received the ball in the right half of the box then cut to his left before burying his shot into the far left side of the net.

“I knew they would come out and it would be a different performance this week because there’s a lot of pride in there,” Schantz said. “Some of these guys didn’t make it to the level that they played at without that kind of commitment and pride and it really showed tonight and I’m very proud of the guys.”

Phoenix Rising FC has a quick turnaround before its second-round U.S. Open Cup match against Premier Development League side Fresno Fuego on Wednesday, May 17. Kickoff will be at 7:00 p.m.