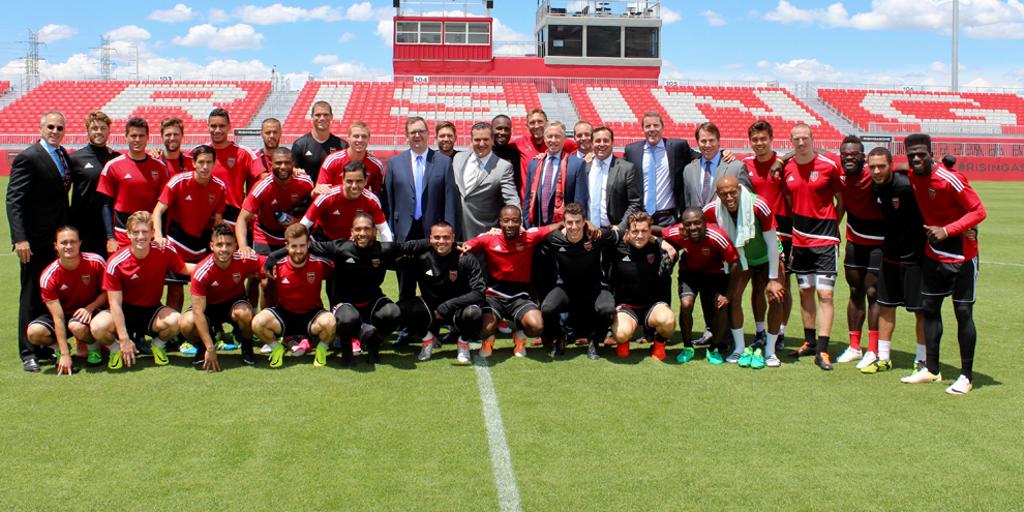 (PHOENIX, AZ) May 9, 2017 – Today, officials from Phoenix Rising Football Club and local leaders hosted Major League Soccer (MLS) President and Deputy Commissioner, Mark Abbott, and other executives for an action-packed day in the Valley. The purpose of the visit was for Phoenix Rising FC leaders to update MLS on its current bid for MLS’ next expansion (scheduled for 2020). Phoenix Rising FC submitted its formal proposal for MLS expansion in January.

“We believe our MLS Expansion Franchise bid is one of the strongest in the country,” said Phoenix Rising FC Governor Berke Bakay.  “Today, we enjoyed having an opportunity to show our guests from MLS the incredible growth and beauty in greater Phoenix, its vibrant soccer community and the numerous accomplishments achieved by Phoenix Rising FC since we last met with MLS in mid-January.  I think it is now clear, Phoenix Rising is ready for MLS.”

Leaders from MLS and Phoenix Rising FC began the day with a sunrise breakfast at a Paradise Valley Resort to highlight the unique beauty of the Sonoran desert and showcase why millions of tourists choose Arizona every year as a sports vacation destination.

Following breakfast, the group visited with President Ray and Vice President Harvier from the Salt River Pima-Maricopa Indian Community, and leaders from the Solanna Group, to discuss the land already under development for Phoenix Rising FC’s Soccer Complex. The site already serves as home to the new 6,200 seat, soccer-specific Phoenix Rising Stadium and includes enough land to add additional soccer practice fields and a 20,000-plus seat MLS stadium that will be privately financed by Phoenix Rising FC and could begin construction within days of Phoenix receiving MLS approval.

MLS executives were then given a tour of the Phoenix Rising Soccer Complex and Stadium, took in a Phoenix Rising FC training session to watch the club prepare for its next home match this Saturday, May 13, against Oklahoma City Energy FC. While on the tour, Phoenix Mayor Greg Stanton and Mesa Mayor John Giles briefed MLS officials about the social and economic benefits of expanding its league in the Greater Phoenix area.

Next the tour continued with a lunch at Phoenix Rising FC’s helpful neighbor, Arizona State University.  There, MLS executives learned from ASU leaders, Tempe Mayor Mark Mitchell and Maricopa County Chairman Denny Barney about the benefits of partnering with the largest public university in the United States, including the availability of Sun Devil Stadium to serve as an interim location for Phoenix Rising FC’s MLS games while its new MLS stadium is under construction at the Phoenix Rising Soccer Complex.

“Today was a great opportunity to meet with members of the community, government officials, the Salt River Pima-Maricopa Indian Community and Arizona State University,” said MLS Deputy Commissioner Mark Abbott.  “We were particularly impressed with the progress Phoenix Rising has made in a short period of time, and the fan base they have developed.  We look forward to continuing our discussions with Phoenix Rising as our expansion selection process continues.”

MLS intends to name two expansion cities in 2017 and two expansion clubs at a later date. When the final announcements will be made has not yet been announced.