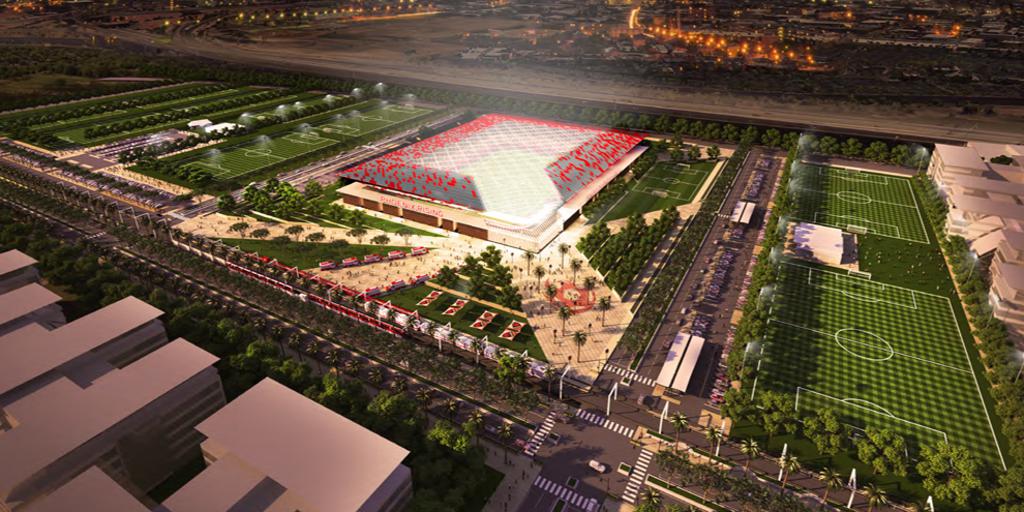 Artist rendering of a potential MLS stadium plan for Phoenix Rising FC. The site will be privately funded

(PHOENIX) May 3, 2017 – Continuing its push for a Major League Soccer (MLS) expansion team, Phoenix Rising Football Club announced today that Goldman Sachs has been retained as structuring agent for the financing of its proposed climate-controlled MLS stadium.

“We are thrilled Phoenix is among the leading expansion markets for MLS,” said Brett M. Johnson, Co-Chairman and Alternate Governor of Phoenix Rising FC.  “Goldman Sachs is a leader in sports finance and most recently capitalized the LAFC and D.C. United stadiums.  With Goldman Sachs, and our unique partnership with the Solanna Group and the Salt River Pima-Maricopa Indian Community, we are prepared to privately fund a world-class, soccer-specific stadium in Phoenix’s most desirable location.”

Phoenix Rising FC’s proposed MLS stadium will be the centerpiece of a larger soccer complex and mixed use development that will accommodate the Phoenix Rising FC youth soccer academy, professional and community soccer events.  Phoenix Rising FC’s plan is to privately fund the stadium on the 45-acre site already under contract and in use by the Club in partnership with the Solanna Group, a real estate development company within the Salt River Pima-Maricopa Indian Community.

Today’s announcement represents another milestone for Phoenix Rising FC’s bid for a MLS expansion team. Of the 12 finalist cities for MLS expansion, Phoenix is ranked No. 1 in Millennials, Hispanics and total population.  MLS would need to add expansion teams in two other cities on the list of finalists to equal the TV households of one expansion team located in Phoenix.

About Phoenix Rising FC
Phoenix Rising FC is the highest-level professional soccer franchise in Arizona’s history. Established in 2013, the club enters its fourth year in the United Soccer League, which has been awarded Division 2 status by the U.S. Soccer Federation.

Major League Soccer (MLS) recently announced Phoenix Rising FC as among 12 applicants being considered for a MLS Expansion Franchise. Phoenix Rising FC sold-out all three home matches played so far during the 2017 season with standing room only crowds in its new, soccer-specific stadium located at the northwest corner of the 101 and 202 freeways in south Scottsdale.

Headquartered in Tampa, Fla., the USL provides unparalleled club support with a growing team of 50 professionals across 17 departments, ranging from operations to marketing, communications and sponsorship. Follow the USL at  USLSoccer.com, the USL Match Center, and on social media via Twitter, Facebook and Instagram.