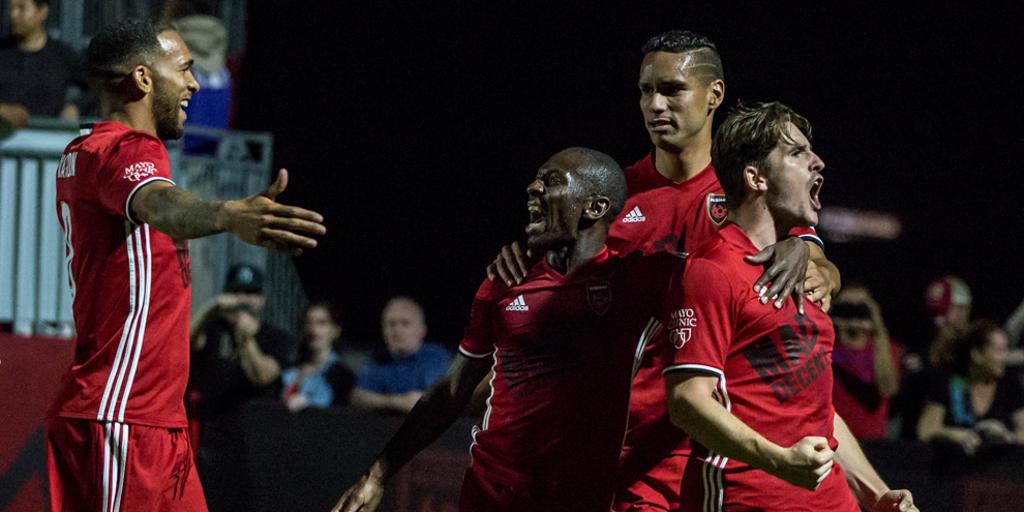 PHOENIX (April 8, 2017) — Phoenix Rising Football Club made club history in front of 6,330 fans with a 2-1 win over LA Galaxy II. Powered by two goals from midfielder Luke Rooney, the win is the club’s first since its 2016 rebrand.

“Really proud of the guys,” said Phoenix Rising FC Head Coach Frank Yallop. “I thought they really stuck together well, didn’t get on each other’s backs, kept playing, and in the end got what they deserved.”

Phoenix Rising FC had several excruciatingly-close chances in the first half, but couldn’t break through. The best chance came in the 22nd minute. With space around him and dribbling about 25-yards from the net, midfielder Shaun Wright-Phillips ripped a rocket toward the net that had the goalkeeper beat. But his shot smacked the post and bounced harmlessly out of danger. The teams entered the half tied 0-0.

“I thought the first thirty minutes was really a joy to watch,” Yallop said. “I mean, really, we could have scored four or five to be honest.”

The second half began with another chance denied for Phoenix Rising FC. Midfielder Alessandro Riggi took a shot from the left-outside edge of the box and forced LA’s Jon Kempin to make a diving save to keep it scoreless.

Three minutes later, Los Dos benefited from a bad bounce to score the match’s first goal. Defender Jordan Stewart attempted to intercept a pass into the box, but the ball took an awkward bounce off his foot and fell to the feet of LA’s Adonis Amaya. The forward buried his opportunity to make it 1-0, Los Dos.

But Phoenix Rising FC’s sustained attack led to its first goal of the match. Omar Bravo forced an LA defender to bring him down in the box, giving Phoenix Rising FC a penalty kick. Rooney stepped to the spot and calmly buried his penalty to equalize 1-1.

Rooney put the match away in the 71st minute. Off a throw in, forward Jason Johnson slotted a pass to Bravo on the left side of the box. Bravo then left the ball off for Rooney at the top of the box. After a swift touch, Rooney wound up and took a shot, beating the goalkeeper to his left for a 2-1 lead and the win.

"I don’t get as much satisfaction in setting up goals," Roney said. "I tried to send Omar in a couple times in the first half (and) had a couple shots myself. One thing that Frank (Yallop) said to me last year, when I first came here, was to take more shots and I had a few tonight and managed to get a couple of goals so that’s always good."

Phoenix Rising FC has a week off before coming back to the Phoenix Rising Soccer Complex on Sunday, April 23, against Swope Park Rangers. The match will kickoff at 7:30 p.m. and tickets can be purchased by going to www.PHXRisingFC.com.