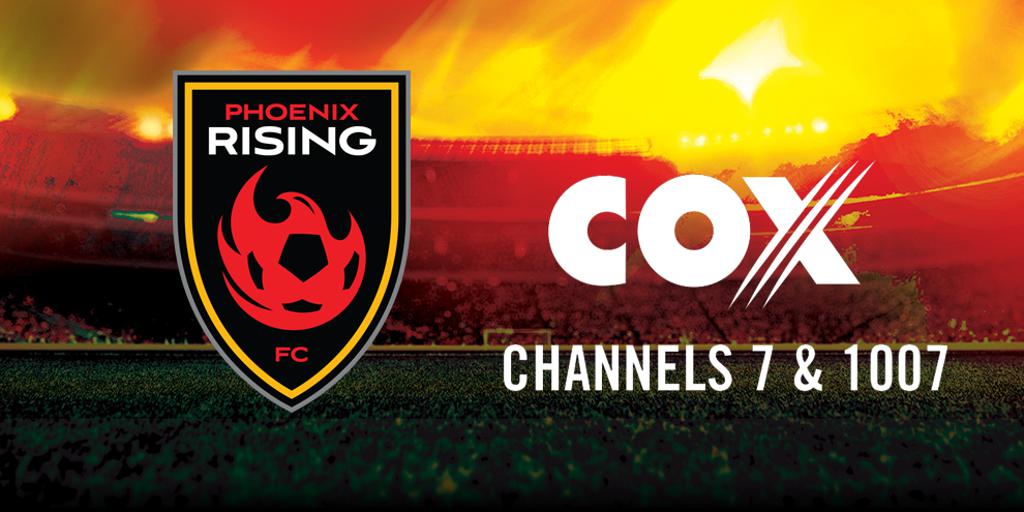 A television partnership signed this week with YurView Arizona Cox channels 7 & 1007 ensures all of Phoenix Rising FC’s 2017 regular season matches will be televised live in English and with a Spanish audio option when pressing the SAP button. All Phoenix Rising FC broadcasts will also be streamed live through the United Soccer League YouTube page.

“We are truly humbled by this outpouring of support from soccer fans in the Greater Phoenix area who have helped us sell out our home opening match,” said Phoenix Rising FC Club Governor Berke Bakay.  “Fortunately, our robust television partnership with YurView Arizona Cox channels 7 & 1007 ensures that soccer fans across the state will have access to all of our home and away matches live in English and Spanish. This is an unprecedented moment for professional soccer in Arizona and will allow our growing fan base to watch Mexico National Team and Chivas legend, Omar Bravo, and English National Team, Manchester City and Chelsea icon, Shaun Wright-Phillips, play for Phoenix Rising FC, even when seats are sold out in our new stadium.”

YurView Arizona Cox channels 7 and 1007 (for high definition) will air all Phoenix Rising FC matches live, statewide on Cox Cable and will provided a Spanish-language broadcast via the SAP button. Additionally, Phoenix Rising FC matches will be re-aired, usually on Sunday mornings, and also archived for fans to view at their convenience On-Demand.  Selected matches may also be nationally televised on the EPSN family of networks.

“We are thrilled to partner with Phoenix Rising FC, and know Arizona viewers will enjoy catching the action of their games on YurView Arizona (Cox channel 7 & 1007),” said Fran Mallace, Vice President of Cox Media.  “Having this professional soccer club call Arizona home is a wonderful addition to our robust sports community.”

Phoenix Rising FC is Arizona’s highest-level professional soccer club. Established in 2013, the club enters its fourth year in the United Soccer League, which has been awarded Division 2 status by the U.S. Soccer Federation. Phoenix Rising FC is among the 12 finalists currently under consideration for an MLS (Division 1) Expansion Franchise.  Beginning in March 25, 2017, Phoenix Rising FC will be playing in its new, soccer-specific stadium located at the northwest corner of the 101 and 202 freeways in south Scottsdale.  For more information on the club, visit the team's website at PhxRisingFC.com. You can also follow the team on Facebook (PHXRisingFC), Twitter (@PHXRisingFC), Instagram (@PHXRisingFC), Snapchat (PHXRisingFC) and YouTube (PhoenixRisingFootballClub). For tickets call (623) 594-9606 or visit PHXRisingFC.com.