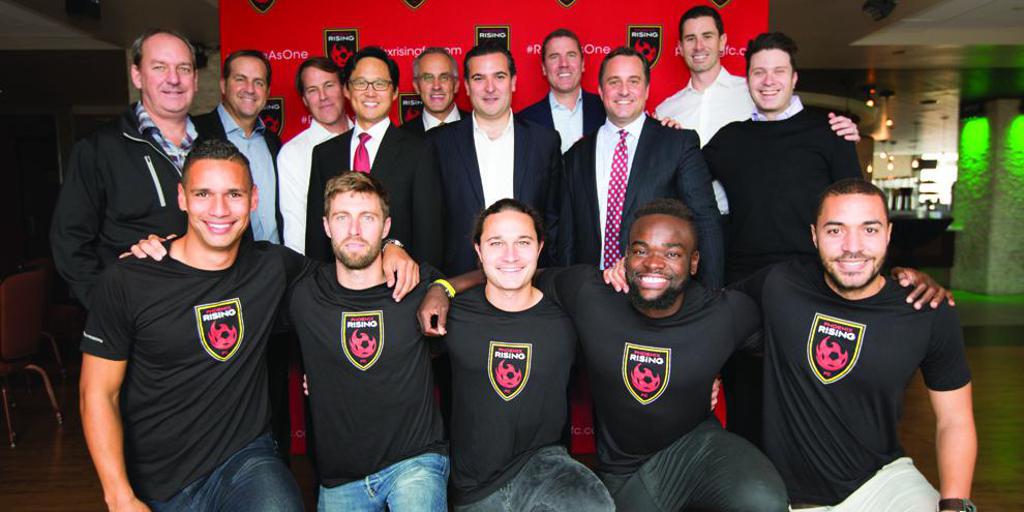 Professional soccer moves to Scottsdale with plans for soccer-specific stadium

PHOENIX (Nov. 28, 2016) – Arizona’s only professional soccer franchise changed its name from Arizona United Soccer Club to Phoenix Rising Football Club. The news was shared today by Phoenix Rising FC ownership before a roomful of leaders within Arizona’s soccer community, fans and a diverse group of businesses. They were among the first to see the team’s new logo coinciding with the name change. It was showcased in a specially produced video featuring Phoenix Rising FC players (PHXRisingFC.com).

Additionally, event guests were the first to hear about the team’s plans, in collaboration with the Solanna Group at the Salt River Pima - Maricopa Indian Community, to develop a 15.8-acre soccer-specific training and stadium facility at McClintock and the 202 Freeway bordering the cities of Tempe and Scottsdale. The club plans to kick off the 2017 soccer season at the new Phoenix Rising FC soccer complex.

“We are thrilled to announce this new era for professional soccer in Arizona,” said Phoenix Rising FC Governor Berke Bakay. “These planned investments should serve as proof that we are serious about creating a successful soccer franchise in our state. We seek to prove that the Valley of the Sun can deliver a successful United Soccer League team and eventually compete at the highest levels of soccer.

David Fordon, Chief Executive Officer and General Manager of the Solanna Group LLC said, “We’re quite impressed by Phoenix Rising FC’s grasp of the goal we are trying to achieve at Akimel 7 for a quality sports and entertainment environment.  We also appreciate the Club’s commitment to bring a state-of-the-art, FIFA stadium designed for Arizona’s climate to Salt River as a significant contribution to the economic growth of the Community.  We’re happy for the Valley and thrilled by the zeal and excitement that professional soccer will bring to all the passionate fans for the sport that are eager for top fight competition and international exhibitions.  We very much welcome the addition of Phoenix Rising FC to our Community.”

Head Coach and President of Soccer Operations for Phoenix Rising FC, Frank Yallop also announced the club’s commitment to developing youth soccer in Arizona. Sharing details about a unique partnership with Arizona Youth Soccer Association (AYSA), Yallop said, “Phoenix Rising FC is very interested in the development of the next generation of male and female soccer players. In fact, the club just re-signed last year’s team captain Blair Gavin, who is a product of an AYSA club team.”

"Arizona Youth Soccer Association is pleased and excited to announce our partnership with Phoenix Rising FC,” said AYSA Executive Director, Leslie Johnson. “Arizona’s professional soccer team, Phoenix Rising FC, is a natural fit as the official partner of AYSA’s most competitive leagues, Arizona Premier and Arizona State League. We look forward to working together for the benefit of youth players in Arizona."

Tom Veit, Executive Vice President and Chief Revenue Officer of the United Soccer League (USL) said, “The USL is truly excited about the future of Phoenix Rising FC, which has a dynamic and dedicated ownership group focused on success. We fully expect current and future soccer fans in the Valley of the Sun to embrace their team turning out in full force to be part of the excitement of professional soccer in one of America's top markets.”

Finally, to commemorate the change in name, Phoenix Rising FC unveiled a revamped website, PHXRisingFC.com and two special offers including:

The United Soccer League, the longest-standing professional affiliate member of U.S. Soccer, is the largest professional soccer league in the United States and Canada, and the world, with 29 teams in 19 U.S. states and three Canadian provinces during the recent 2016 season. The USL has more than doubled in size since 2014 and built a stable, highly competitive professional soccer league on a national footprint with strong ownership groups in major markets positioned for long-term success. The 2016 season marked the introduction of six teams - Bethlehem Steel FC, FC Cincinnati, Orlando City B, Rio Grande Valley FC, San Antonio FC and the Swope Park Rangers. The league has confirmed the additions of Reno 1868 FC, the Tampa Bay Rowdies and Ottawa Fury FC in 2017 and Nashville SC in 2018. The USL's teams are divided into two conferences - Eastern and Western - with each team playing 32 regular season games starting in 2017. In addition to league play, USL teams compete in the Lamar Hunt U.S. Open Cup as well as various domestic and international exhibitions. The USL is the strongest U.S. men's professional soccer league below Major League Soccer. Follow the USL at USLSoccer.com, on YouTube (www.YouTube.com/USL), and on social media via Twitter, Facebook and Instagram