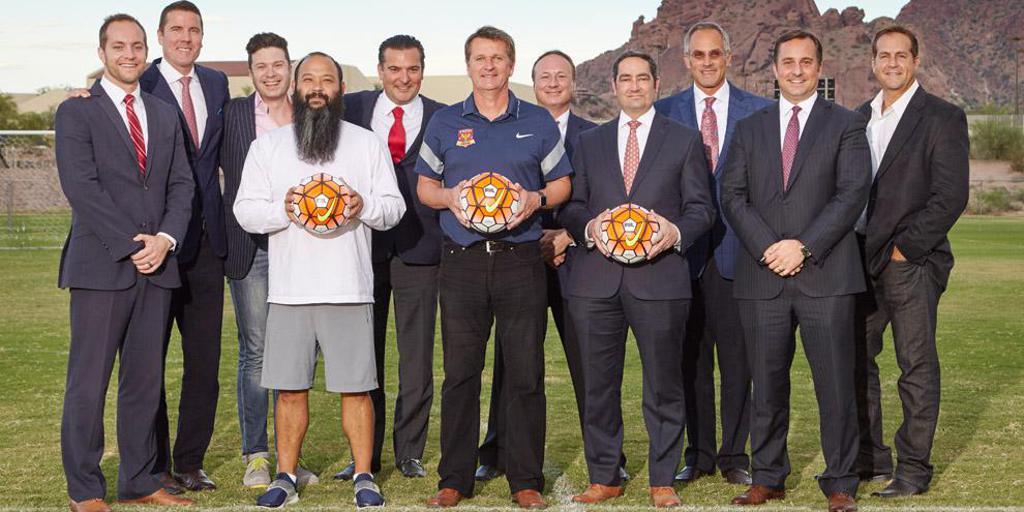 “We couldn’t be more excited at the opportunity we have with Arizona United by bringing together a who’s who of business leaders in the Phoenix area,” said Bakay. “Soccer has always been in my blood. My interest and involvement in the soccer world has been positively influenced by one of my uncles serving as the Vice-Chairman of the famed Galatasaray club in Istanbul.”

Farca, who was born and raised in Mexico City, is president of International Business Group and in 2015 was appointed President of the Board of Directors of the Arizona-Mexico Commission by Arizona Governor Doug Ducey.

“Launching Arizona United SC, the state’s only professional soccer franchise, ranks among my career highlights,” said Eng. “When we created the club in 2014, I envisioned a role as caretaker of a soccer side that would be a source of pride for the community. But I always planned to pass the torch to new owners who have a deeper passion for this great sport.

“The new ownership is a strong mix of local business leaders who are committed to growing the game to new heights. Soccer is the ultimate team sport, and I am grateful for the efforts of our players, staff and sponsors and the unwavering support of our faithful fans, many whom I got to know personally. The future of professional soccer in Arizona is bright. I look forward to joining the supporter’s group and cheering Arizona United on for many years to come,” continued Eng.

“I want to give credit and am very grateful to Kyle for his work with Arizona United SC since 2014 when he founded the team at a time when the USL was just beginning to expand west,” Papadakis said. “We look forward to working with Arizona United’s new ownership group who recognize the club’s potential and have already made a commitment to raise the level of this team on and off the field.”

Brett M. Johnson, who has served as the team’s Co-Chairman and Alternate Governor and Ballertronix, the ownership group led by two-time Grammy Award winner Diplo, entertainment lawyer David Rappaport, Kevin Kusatsu and Pete Wentz, as well as other Limited Partners will remain with the team.

“Kyle Eng unquestionably saved professional soccer in Phoenix when he launched Arizona United out of the ashes of Phoenix Wolves FC,” stated Johnson and Rappaport jointly. “We are excited to continue that work with our new partners and do everything in our power to make Arizona United the most popular professional sports team in the Valley.”

About Arizona United SC: Arizona United Soccer Club is Arizona’s only professional soccer franchise. Established in 2014, the club is in its third year in the United Soccer League. On the pitch, Arizona United is led by renowned soccer manager Frank Yallop who serves as head coach and president of soccer operations. Yallop has 13 years of head coaching experience in Major League Soccer (MLS), including winning two MLS titles, two MLS Coach of the Year awards and one Supporters Shield. For more information on the club, visit the team’s website at www.ArizonaUnited.com. You can also follow the team on Facebook (/ArizonaUnitedSoccer), Twitter (@AZUnitedSC), Instagram (AZUnitedSC), or Snapchat (azunitedsc).

About USL: The United Soccer League, the longest-standing professional affiliate member of U.S. Soccer, is the largest professional soccer league in the United States and Canada, and the world with 29 teams in 19 U.S. states and three Canadian provinces. Through aggressive and strategic growth, the USL has more than doubled in size since 2014 and built a stable, national professional soccer league. The 2016 season marked the introduction of six teams with Reno 1868 FC joining in 2017 and Nashville FC already confirmed for 2018. The USL’s teams are divided into two conferences – Eastern and Western – with each team playing 30 regular season games. In addition to league play, USL teams compete in the Lamar Hunt U.S. Open Cup as well as various domestic and international exhibitions. Every game of the 2016 USL season can be seen live, free and in HD through the league’s official Match Center (www.uslsoccer.com/match-center), with updates from across the league also available via www.USLSoccer.com, Twitter (@USL), Facebook (/USLSoccer) and Instagram (USLSoccer).