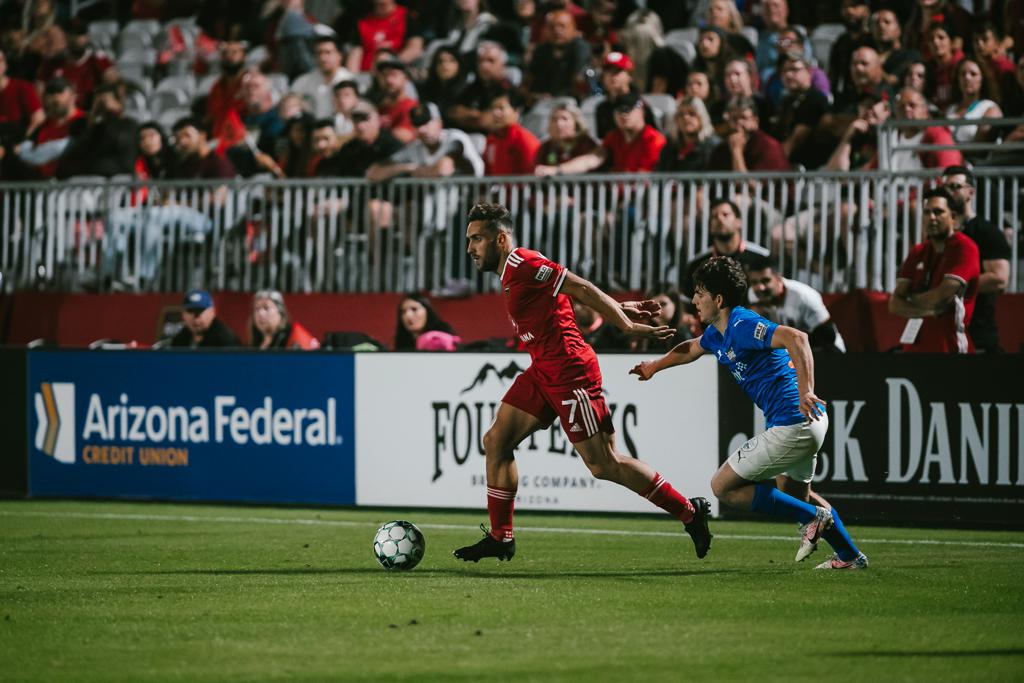 Rising escaped a disastrous start in the sixth minute when Rio Grande Valley earned a free kick 25-yards from goal in the center of the pitch. Rodrigo López stepped up to take the free kick, firing a line-drive shot that caught the outside of the post.

Phoenix countered in the 15th minute when Darnell King came free at the back post. King collected the pass and tried to beat Toros’ goalkeeper Collin Miller low to the far post, but his pass was cut out. The loose ball fell to Aodhan Quinn at the top of the box and the midfielder cracked a volley that skimmed the crossbar on its way onto the top of the net.

RGV took a 1-0 lead in the 19th minute when Baboucarr Njie sprinted through the center of Phoenix’s defense and smacked a crisp shot that slid under the arm of Rising goalkeeper Andre Rawls and settled into the back of the net.

The wide-open game continued in the 21st minute, when Njie brought down King at the top of the area, giving Phoenix a free kick from a dangerous spot. Solomon Asante stepped in and bent a curling shot around the wall, beating Miller to the near post by an inch. The goalkeeper got his left hand on the shot but couldn’t keep it out, redirecting the ball into the side netting to level the score, 1-1.

Rising lost Kevon Lambert to an injury in the 32nd minute. He was replaced by veteran Luis Seijas in defensive midfield. Three minutes later, Rising nearly went ahead when a goal-mouth scramble fell to the feet of Darren Mattocks. Phoenix’s No. 9 tried to knock it over the goal line from close range but a sliding RGV defender got a boot to the ball to redirect it off the near post and out for a corner kick.

Phoenix’s high press produced a turnover in the 54th minute, when Seijas picked off a pass in RGV’s third of the pitch. Seijas drove towards goal before dishing a short pass to his right. Rodriguez was there to strike a low shot with his first touch, beating Miller to the corner of the net to make it 2-1.

Mattocks nearly added a third goal for Rising in the 62nd minute after Asante and Santi Moar combined at the top of the box to create a shot for the forward at the back post, but Miller was up to the task and make a diving save at the front post to keep it close.

Rodrigo Lopez converted a free kick chance from the top of the box in the 71st minute to tie the game, 2-2 heading into the final 20 minutes of play.

Rodriguez spun three RGV defenders and earned a free kick for Phoenix in the 78th minute. Asante lined up for his second strike of the match, but Miller made a diving save to his left side to knock the ball out for a corner.

The match continued into extra time, where Phoenix took a 3-2 lead on Asante’s second of the match. Rising’s captain brought down a pass from Jon Bakero in the center of the six-yard box and finished off the chance with a blast into the back of the net in the 101st minute.

But referee Brandon Stevis pointed to the spot in the 109th minute, handing RGV’s Elvis Amoh a penalty kick, which he converted to tie the game, 3-3.

Bakero netted his shot to start the shootout, but Miller made back-to-back saves to deny Rodriguez and Quinn. Rawls pulled one back for Phoenix with a save on Rodrigo Lopez in the fourth round, but Amoh ended the match with his second penalty-kick conversion of the night.

On his overall thoughts on the game…

Very good game, it was exciting as hell. Our fans were unbelievable tonight. Man, this place was rocking. When we scored that third goal to go up, 3-2, I thought we were going to be able to get it done, but a little mistake here or there cost us. You can't score three goals and not win at home. I love these guys. They fight hard, they fight very hard.

On what he told his players after the game…

This is going to be a tough one. It'll be hard this week for them. Some of the guys won't be back. Some of them will. I know I will start tomorrow thinking about next year and how to keep moving forward. We have to grow as an organization. We have to learn. Unfortunately, we had some injuries, we made some moves here or there, but still, we did enough to win. Fair play to Wilmer and RGV, they changed that team tremendously. They were very, very physical, very aggressive, very tenacious. They're going to be a tough team to beat.

On what he wants to tell the fans…

It was a season of ups and downs. We had some difficult moments, but the adversity really helped us. Don't take anything away from these boys. And the guys that don't come back, they'll always be remembered, and the guys that do, they're going to fight for you. They're going to give everything they can to bring a trophy here. We've won a lot of games here at Phoenix Rising. They should be very, very proud of the reputation they built here.