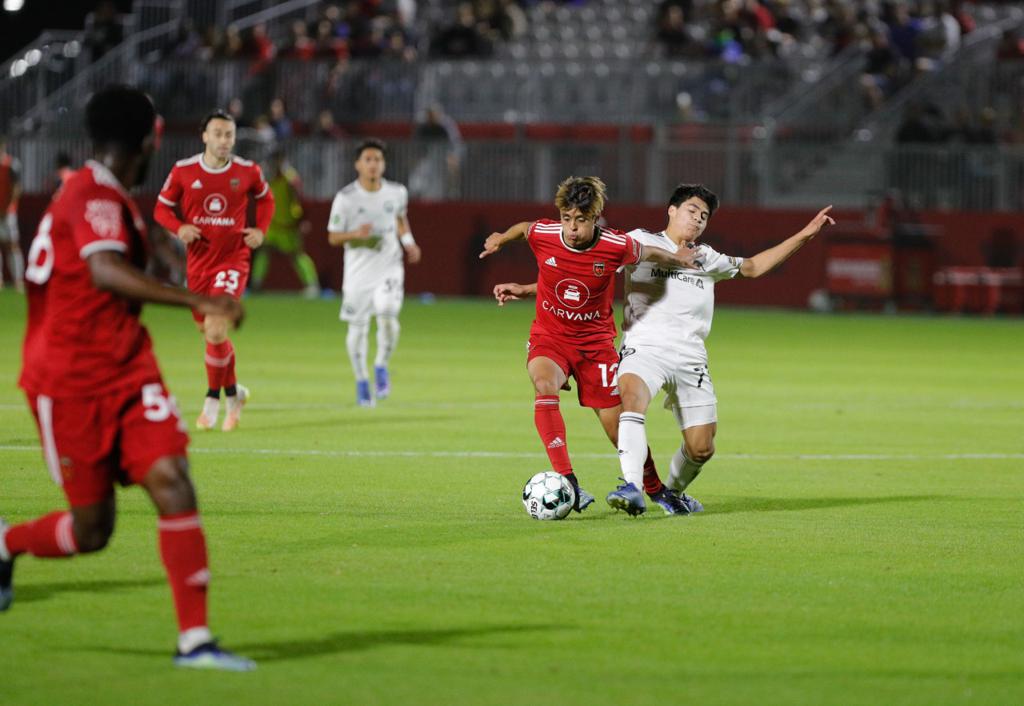 Rising begins playoffs next Saturday, Nov. 6 (7:30 p.m.), at Wild Horse Pass vs. RGV Toros, which finished fourth in the Mountain Division. Based on its regular-season record, Phoenix would host home matches in the conference semifinal (Nov. 13) and final (Nov. 20) should it advance.

Tonight, Rising held a 60-40 edge in possession through the first 20 minutes of play, but it was Tacoma that produced the most-dangerous chance early in the match when Jose Carlos Anguiano came free down Phoenix’s right side and crossed a ball to the back post. The high cross was won in the center of the box by Danny Leyva. The forward redirected a header on goal but Rising goalkeeper Andre Rawls dove to his right side to make a save in the bottom corner of the net.

Tacoma took a 1-0 lead in the 30th minute of the match when Samuel Adeniran put a ball into the area that was partially blocked by Rising center back James Musa. Rising defenders swarmed to the ball to attempt to clear the ball off the line but Adeniran was first to react, hammering a hard shot high into the far corner of the goal.

Tate Schmitt nearly beat Tacoma goalkeeper Christian Herrera from distance with a low shot in the 35th minute. The ball took a deflection on its way through the area and looked to be headed into the back of the net before the goalkeeper stuck out his right arm and made a diving save to preserve the 1-0 lead for the Defiance.

Adeniran nearly made it 2-0 in the 54th minute, when he hit a turning shot from the center of the area with his first touch. Fortunately for Rising, Rawls was in position and made an outstanding save, slapping the shot over the bar to keep it a one-goal game.

Rising head coach Rick Schantz made four changes in the 57th minute. One of the players he brought on, Luis Seijas came free on Phoenix’s left side and crossed a ball into the area with his first touch. The pass was spot-on, finding Jon Bakero in the center of the area. Rising’s No. 10 got off a glancing header that just missed catching the back post in the 62nd minute.

Bakero released another one of Schantz’s substitutions, Arturo Rodriguez, in-alone on goal with a perfectly weighted ball in the 70th minute. Rodriguez darted straight at goal, slipped between a pair of recovering defenders and poked a shot past Herrera to tie the score, 1-1.

Thoughts on the regular-season…

We just went undefeated at home through the whole season. We had the most points in the West. We finished with 68 goals and 67 points. Not a bad season. We scored more goals than any team in the U.S., even MLS. I’m proud of this team and they’re pretty confident.

At the end of the day, being the best team in the West is massive for us. Tacoma had a lot to play for tonight. They played very narrow. We could have been better in wide areas. We had some players in different spots. Our subs were unbelievable. They made a huge impact and brought a lot of energy.

That’s what we’re looking forward to heading into the playoffs. We have a lot of guys that can come in and change the game.

Thoughts on the match…

It was a battle from minute one. Tacoma needed to win to get into a playoff spot. They came in hungry but so were we. The energy was loud in the locker room going into the match. They played how we expected. They sat in a bit, gave us more of the possession and were looking for counter attacks. We started slower than I would have liked to… The last regular season game of the year. We would have liked to have finished with a statement win but still credit the effort. It’s not easy coming from behind after going down a goal.