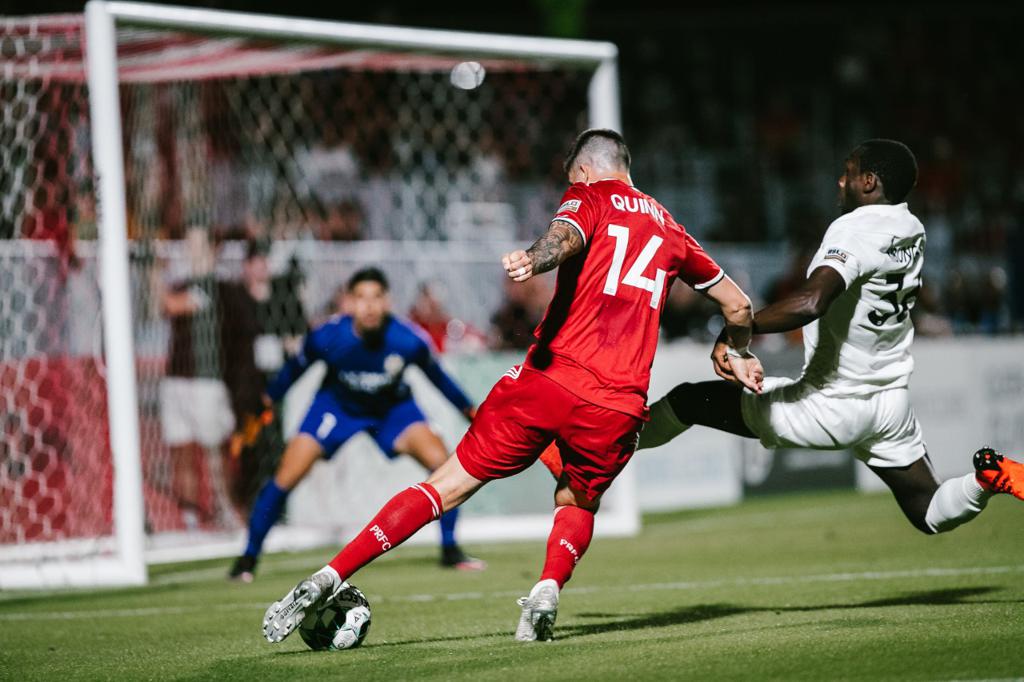 Kevon Lambert scored the lone goal for Rising in the 84th minute of the match, but it was officially ruled an own goal by Sacramento defender Nabi Kibunguchy. Rising closes out its regular season next Saturday, October 30, vs. Tacoma at home. That match will kick off at 7:30 p.m.

Tonight, Rising held a slight edge in possession and shots through the first 15 minutes of the match but gave up a quality scoring opportunity in that same minute, when Shannon Gomez came free, wide to the left side and smacked a low cross into the area. The pass slipped through the area to Cameron Iwasa at the back post, but the forward was unable to keep his shot on frame.

Sacramento went ahead 1-0 n the 23rd minute when a long-range shot took a deflection off a Phoenix defender, sending Rising goalkeeper Andre Rawls the wrong direction. The goalkeeper was unable to recover, and the shot skipped into the back of the net to give the visitors an early advantage.

Rising head coach Rick Schantz made one change at halftime, bringing on Jon Bakero at forward in place of Darren Mattocks.

Phoenix earned its best chance of the match in the 59th minute after Solomon Asante earned a corner kick. The ensuing free kick was played to the back post, where Santi Moar collected the loose ball, moved past a defender, and cracked a hard shot to the near post. Unfortunately for Rising the attempt caught the wrong side of the post and went out for a goal kick.

Moar earned a free kick in the 75th minute and Arturo Rodriguez curled a dangerous cross to the near post for Manuel Madrid. The center back did well to redirect a header on goal, but Sacramento goalkeeper Carlos Saldana jumped backwards and tapped the ball over the bar to preserve the 1-0 lead.

Rising finally broke through to even the match, 1-1, when Lambert got on the end of a cross played in by Aodhan Quinn. The Jamaican ripped a low shot across the face of goal and it caught the foot of Sacramento defender Nabi Kibunguchy, who was standing on the goal line and tricked into the back of the net.

Sacramento came here and made it very difficult on us. We bored our fans in the first half. We were too slow. We were not sharp. We tried a few different player combinations this game and we got a lot of answers. Had we lost, I would have been upset but they showed a lot of heart and emotion. What you saw was a team that didn’t feel desperation. This is the hard part. When you clinch your division and things are going really well for you, you forget what it feels like to be desperate to have to win a game.

We didn’t get the start we wanted but we came out in the second half and showed what we’re capable of doing. That will be key for us going into the playoffs. We know we have to start faster. Most of the teams that come here are going to play a lot like Sacramento did tonight.

We’ve been practicing a lot of set pieces. If we make the correct runs and the delivery is good, we should be scoring a set-piece goal every game. Tonight, the delivery was right and I made the right run. It ended up in the goal.