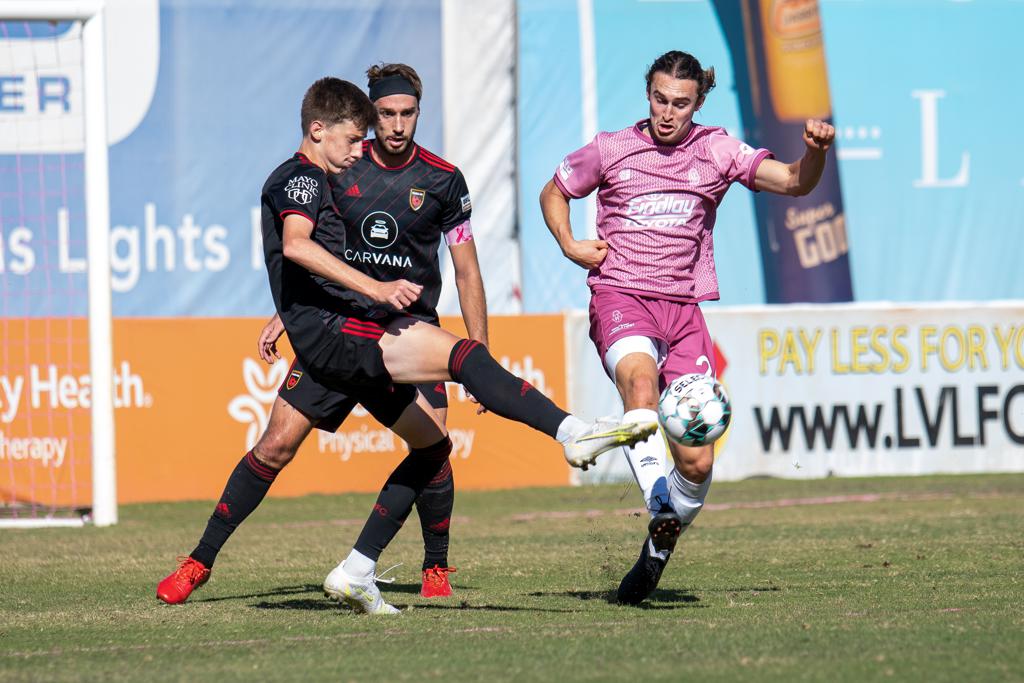 LAS VEGAS, Nevada (Saturday, Oct. 16) – Phoenix Rising FC (20-5-5) earned three points in a 6-3 win at Cashman Field this afternoon to climb back on top of the USL Championship table with 65 points.

Egbo scored first for Rising in just the fourth minute of the match. Making his first start since Aug. 28, the forward made a back-post run when David Loera switched the point of attack from Rising’s right side to the left. Quinn picked up his head and found Egbo with a low pass into the area and he finished by smacking a shot off a defender that trickled into the back of the net.

Calistri made it 2-0 in the 16th minute when Quinn played a ball in-behind Lights SC’s back line. Playing as a right-sided forward today, Calistri outran his marker and slipped a low shot past Lights SC goalkeeper Alex Rando.

Moar scored his first less than a minute later, beating two players on the dribble on the left flank before cutting in and finishing off a beautiful goal with another shot to Rando’s left side to make it 3-0.

Las Vegas took a goal back in the 18th minute when Cal Jennings got on the end of a pass from Daniel Trejo inside the six-yard box. Jennings finished the chance from very close range with his first touch to make it 3-1.

Lights SC made it 3-2 in the 41st minute when Bruce El Mesmari came free on Vegas’ right side. The forward cut into the center, avoided a pair of slide tackles by Rising defenders and slipped a pass over to Jennings on the back post. Once again, Jennings finished easily with his first touch to make it a one-goal game.

Rising head coach Rick Schantz brought on two subs at halftime. Arturo Rodriguez entered the match in place of David Loera while Jon Bakero came on for Egbo. Despite the changes, it was still Quinn delivering the mail. He came open on the left flank and sent a cross into the area that was redirected into the back of the net with a header by Darnell King to make it 4-2 in the 52nd minute. Quinn’s third assist of the match put him on top the USL Championship with 11 on the season.

Moar scored his second of the match in the 69th minute after Luis Seijas started a quick counterattack with a pass down the left side. Moar cut inside near the top of the box and fired a shot high towards Rando. The goalkeeper looked to have made the save, but instead bobbled the ball backwards into his own net to make it 5-2

Jennings completed his hat trick to make it 5-3 with seven minutes remaining, but Arturo Rodriguez found Luiz Seijas in the 85thminute to make it a 6-3 final.

Seijas’ goal was the first for the veteran in a Rising uniform. It extended Phoenix’s (66) lead in the goal-scoring race to nine clear of Louisville, who has scored 57 goals this season.

They’re a good, young team. We knew after lat match we needed to come out and get that first goal. We got the second goal, tried to score as many as we could. We kind of lost our focus for a little bit there but we started the second half strong, and we were able to see it out.

Anytime you can go on the road and get a good, commanding victory, it’s a good day. There were a lot of good performances. A lot of guys played really well. We’ll look to carry that into next weekend.