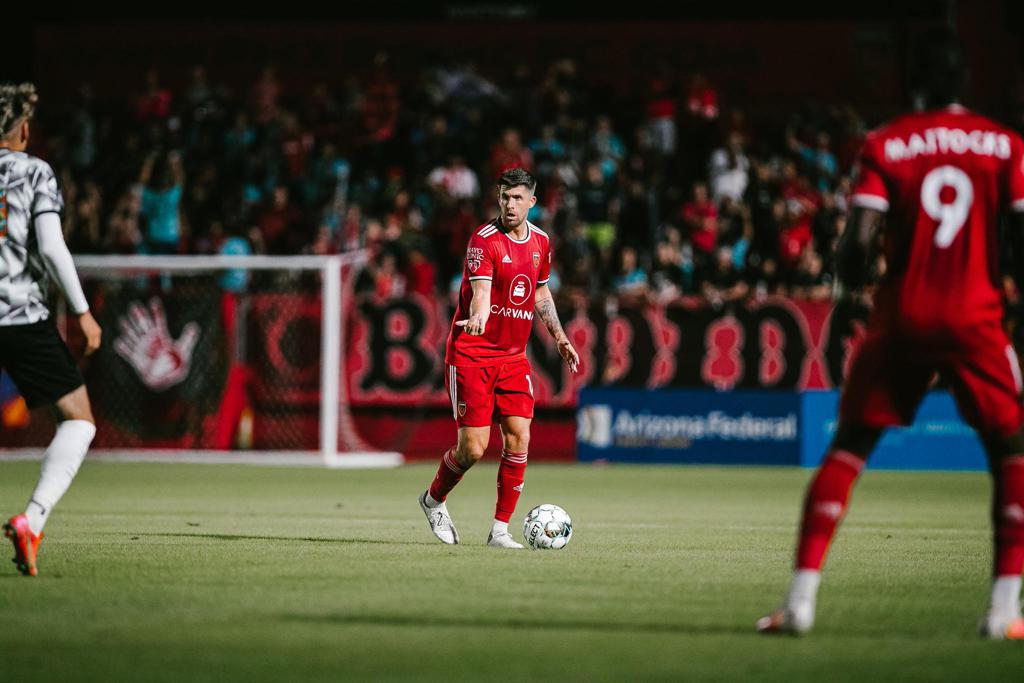 Rising scored the lone goal of the match in the 11th minute, when Solomon Asante earned a free kick on the right flank, 35-yards from goal. Aodhan Quinn stepped up to take the free kick, curling in a low, left-footed ball that skipped across the area and found Darren Mattocks at the front post. The forward netted his fifth goal of the season, beating Oakland goalkeeper Paul Blanchette with a header, low and into the side netting.

Oakland ripped a shot that caught the underside of the crossbar in the 23rd minute of the match. Fortunately for Rising, the ball did not cross the line and the home side retained its 1-0 lead heading into halftime.

Coming off a shutout win in Orange County last Saturday night, Rising’s defense was on its game and did not allow a shot on target through the first 45 minutes of play.

Oakland’s first shot of the match came in the 76th minute when a cross played in from Roots’ right flank was redirected on goal by forward Jeremy Bokila. Fortunately for Rising, Rawls was alert and in perfect position to make a stand-up save in the center of the goal.

Rawls made a second save, diving far to his left side to push a shot wide of the back post in the 81st minute.

Rawls’ best save of the night came in the second minute of stoppage time when Bokila got up to win another header in the center of the area. The goalkeeper did well to deflect the initial shot, then recovered to dive on the loose ball before it crossed the goal line, giving Rising its 10th shutout of the season via a four-save evening.

The win improved Rawls’ record with Phoenix this season to 15-0-3.

Overall thoughts on the match…

Credit to Oakland. They're such a fluid team. Their movement… They've changed quite a bit.  They’ve really, really improved since the beginning of the year. Offensively we were sharp. We created a lot of good opportunities that we left on the table. On a better night, it's three or four goals. They had two that probably should have gone in, but Andre [Rawls] made two spectacular saves. When you're not scoring, you start to get nervous, you leave these teams around and eventually they get a moment, and it's 1-1. But Rawlsy's been on fire and kind of saved our butts again tonight.

The best thing about Andre is that he's the same every day. He's one of these goalkeepers that is just so consistent in training. In the games, you know exactly what you're going to get from a guy like this. Usually goalkeepers are a bit strange, but Rawlsy is the most normal human being I've ever worked with that's played goalkeeper. I like him a lot, and we're really fortunate to have him here.

Overall thoughts on the match…

I thought the team showed great character near the end. They were pushing us back a little bit back near the end. It was a good and hard-fought battle. We showed a lot of possibility near the end and we were able to get the result.

On the team being undefeated when he starts…

It's been a team effort the whole way through. I'm fortunate to have those stats, goalkeepers love our numbers. Very humble, very grateful to have the six clean sheets, and the wins and the draws. But at the end of the day, that comes down to the team. They're the ones that are busting their butts for 90 minutes day-in, day-out. Bailing me out when I screw up… I bail them out when they screw up. It's that little chemistry that goes back and forth. I'm really happy with it, but I can't take all the credit. It's the guys in front of me as well.