Rising Books Ticket to Postseason with 2-1 Win in Tacoma

Moar scores in sixth-straight to lift Phoenix over Tacoma 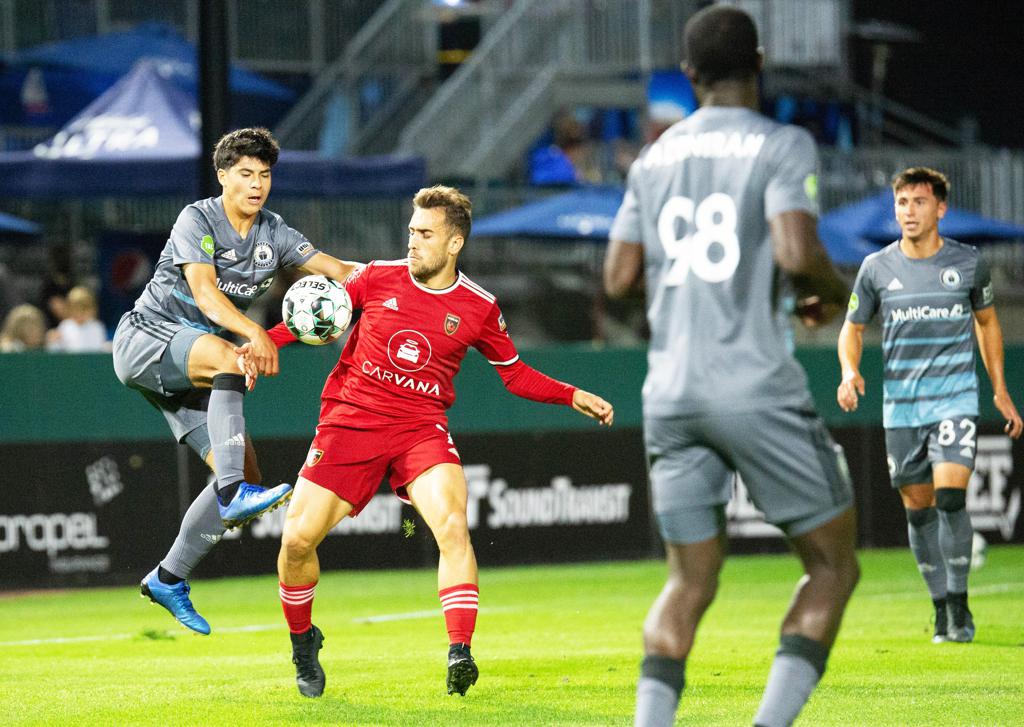 Santi Moar scored the game-winner for Rising in the 90th minute of the match. It was Moar’s sixth consecutive match with a goal. Jon Bakero opened the scoring for Phoenix with his third of the season. That goal came in the 80th minute, just six minutes after subbing into the game for forward Darren Mattocks.

Next up for Rising is LA Galaxy II in Los Angles on Wednesday, September 29. That match is set to kick off at 7:30 p.m. The club’s next match at Wild Horse Pass is set for Saturday, October 9. Tickets for that game are available at www.PHXRisingFC.com.

Tonight, Rising outshot Tacoma 10-1 in the first half but were unable to break down the Defiance’s defensive formation through the first 45 minutes of play despite having a steep, 73-27 advantage in possession.

Phoenix’s best chance of the half came in the 32nd minute when Darren Mattocks let a centering pass at the top of the area run through his legs to Solomon Asante at the back post. Asante struck the ball with his first touch but was unable to keep his attempt under the bar to challenge Tacoma goalkeeper Christian Herrera.

Aodhan Quinn played left back Ryan Flood in, over the top of the Tacoma back line in the 49th minute. The converted forward tracked down the pass near the end line and centered a pass to Asante. The two-time defending league MVP turned and ripped a hard shot on goal, but the attempt was blocked by a late-arriving defender.

Darnell King saved a sure goal when he tracked back and ran down Tacoma forward Samuel Adeniran, who was in-alone on goal against Andre Rawls in the 62nd minute. Defiance’s Ray Serrano put Adeniran through with a pass that split a pair of Rising defenders, but King used his speed to catch up to the forward, sliding to block a shot that looked destined for the low corner of the net.

Asante cracked another hard shot on goal in the 72nd minute. The Rising, line-drive shot forced a diving save from Herrera to keep the match scoreless.

Joe Farrell initiated the play that led to the opening goal for Rising. The center back grabbed the ball and sprinted forward towards the top of the box in the 78th minute. The defender looked like he was setting up to take a shot, but instead pushed the ball out wide to King. The right back whipped in a cross that found the foot of Bakero and the Spaniard netted his third goal of the season with a classy one-touch finish at the back post to make it 1-0.

Tacoma tied the match just two minutes later when a long ball was played up the left flank to Samuel Adeniran. Rawls charged off his line to clear the ball away from danger but came up empty on his attempt, leaving Adeniran to collect the loose ball and deposit it into the empty net to make it 1-1.

Moar scored the game-winner in the 90th minute of the match on Rising’s ninth corner kick of the evening. Quinn sent in the initial ball and had it recycled back to his foot on the right flank, near the edge of the area. Quinn faked a left-footed cross before sending a right-footed ball in towards Kevon Lambert. The loose ball fell to Moar, who brought it down with his thigh before volleying a hard shot through a crowd. The shot caught a Tacoma defender near the goal line but he was not able to keep it out of the net as the match finished, 2-1, in favor of Phoenix.