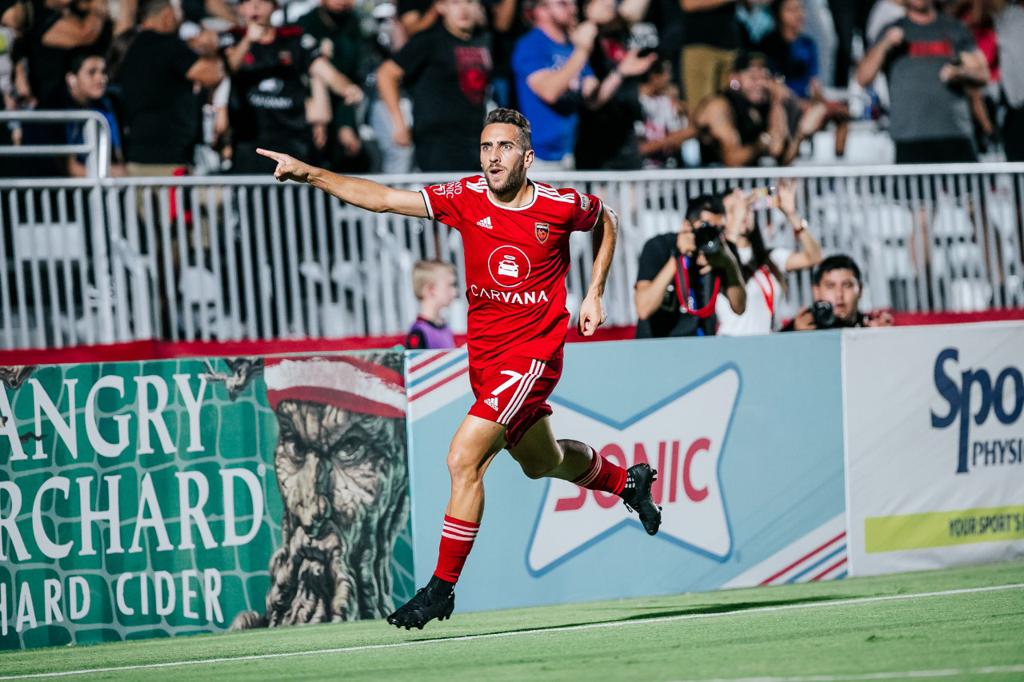 The club also moved atop the USL Championship standings with 50 points. It is the second-fastest the club has reached the 50-point plateau (23 matches) in club history behind only the 2019 squad that won 20 consecutive matches.

Aodhan Quinn, Santi Moar, Arturo Rodriguez and Jon Bakero found the back of the net for Rising in the win. Quinn and Prince Saydee picked up assists.

Phoenix is back in action at home this Saturday, Sept. 18, vs. Orange County SC. That match, presented by Carvana, kicks off at 7:30 p.m. and fans are encouraged to come take advantage of Rising’s $3 food and beverage offer.

Tonight, Phoenix Rising’s high-energy press forced a turnover in just the second minute of the match. Joey Calistri intercepted the pass, quickly getting the ball to Bakero. Playing for the first time in a No. 9 role this season, Bakero did well to back-heel a pass into space for Quinn. With Quinn in-alone on goal, Lights FC goalkeeper Alex Rando charged off his line to cut down on the midfielder’s angle. Fortunately for Rising, Quinn got enough power on the left-footed shot to have it trickle past the ‘keeper and roll, slowly, into the back of the goal to make it 1-0 early.

Quinn added an assist in the 17th minute after Calistri earned a set piece opportunity 30 yards from goal. Quinn sent a line-drive cross into the center of the area, where Moar connected with a sharp header towards the near post. The snap-header sped over the head of Rando and high into the corner of the net to make it 2-0.

Las Vegas pulled a goal back in the 27th minute on a set piece of its own, when Julian Vasquez redirected a header into the goal from close range after Roberto Molina served in a dangerous ball from the right flank.

Rodriguez reinstated Rising’s two-goal lead just two minutes later, when he stole the ball in Phoenix’s offensive third of the pitch and sprinted towards goal. Rodriguez faked a shot to fool a defender at the top of the area and then launched a rocket between the near post and Rando’s left arm to make it, 3-1, in the 29th minute.

Bakero found the back of the net in the 82nd minute to make it a 4-1 final. Saydee set up the chance, grabbing the ball on the left flank and speeding past two defenders before centering a pass to Bakero at the top of the area. Bakero found enough space in the center of the field to turn, pick his head up, and beat Rando low to the far post.

Being at home is awesome because we can really open things up. The surface is unbelievable. Our grounds crew is one of the best in the league. They take so much pride in this field. It's fun to be out here playing. It really moves fast. The guys know they've got a goal to reach. They set a goal. We're on a little bit of a roll right now. The team is doing well. We brought in some really, really good players, some very talented guys that have raised the whole level of our team. It's the final stretch to get ready for the playoffs.

What we said is if we don't win today, the three points in LA don't matter. Getting three points in LA now is huge because you got six points on the road, you come home and take care of business tonight, that really, really helps us. That puts us at 16 points clear with nine to play. I'd have to really ruin this team for us to not make the playoffs. The guys have a good focus. They have a good mentality...

On what getting an early goal does for the team…

It just gives us confidence. It's good to get that early lead obviously. It gives guys confidence to keep pushing. Glad we got the second, a little disappointed we gave up that goal to them, but Arturo found the third right after so that was another good confidence boost.

I loved it. It was fun. I was very successful in college in that position, so I felt comfortable. Obviously, I haven't played it in three or four years, but, I don't play the position in a conventional way. I bring different elements. I was very comfortable and I showed that I can do it. I'm not the fastest. I'm not the biggest, but I think the link I play, holding the ball up, keeping the ball, the attributes that I have as a midfielder – I try to bring as a forward.