Rising Moves on top the League Standings with 3-2 Win 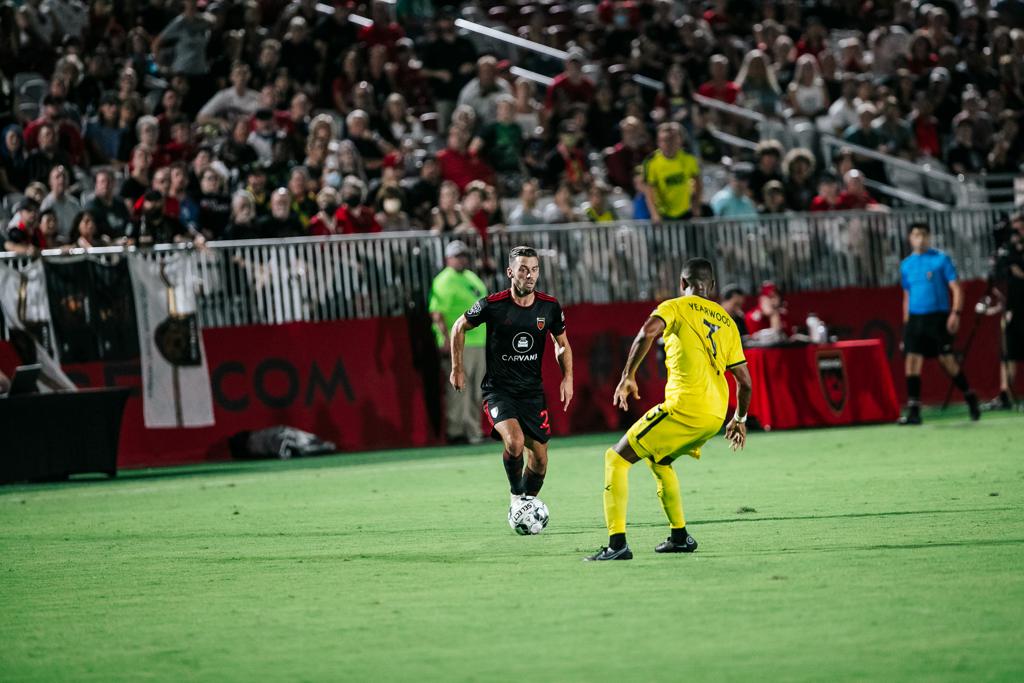 For the first time this year, Rising came from behind to win as Joey Calistri scored twice and Santi Moar netted the game-winner in the 90th minute. The goal is Moar’s team-leading ninth of the season. Rising remains unbeaten at Wild Horse Pass with a record of 8-0-3. The club is away the next two weeks, but returns to Phoenix on Wednesday, September 15, vs. Las Vegas Lights FC.

Tonight, Rising opened the match on the attack, getting three shots before the 10th minute of the match, but New Mexico countered in the 11th minute, when Andrew Tainari played a simple pass forward near the top of the area. Tainari’s target, Chris Wehan let the ball run on through his feet, crossing up his defender. Sergio Rivas benefitted by receiving the ball in space in-behind Phoenix’s back line. Rivas turned and laced a right-footed blast into the right corner of the net to make it 1-0 early.

Phoenix countered in the 16th minute when Moar won the ball back in New Mexico’s defensive third of the pitch. Moar quickly got the ball to Calistri at the back post, off to the left of New Mexico goalkeeper Alex Tambakis. Calistri picked up his head and attempted to pick out the run of David Egbo, but the forward was unable to catch up to the pass and the ball slipped just wide of the post to Tambakis’ right side.

Joe Farrell came up from his center back position to win a header over New Mexico defender Justin Schmidt on a set piece in the 44th minute, but once again, Tambakis was in position and made a solid save at the back post.

In first-half stoppage time, Calistri got the ball out wide and cut his run inside. Near the top of the box, Calistri tried to pick out the low corner to Tambakis’ right side, but the goalkeeper made an outstanding save, diving to his post to slap away the shot for his third impressive save of the half.

Tambakis made his fourth save of the match, just six minutes into the second half when Darnell King intercepted a pass and got the ball to Calistri on the right flank. Calistri found Arturo Rodriguez open at the top of the box. He ripped a hard shot at the near post, but the goalkeeper punched the chance away.

Phoenix made it 1-1 on a counter-attack in the 59th minute. Moar grabbed the ball at midfield and ran at goal. Near the top of the box, he hit Aodhan Quinn on his overlapping run to the left side. Quinn used his first touch to pick out Calistri with a perfect pass and the midfielder buried the chance with a first-time strike back to the far corner of the net to Tambakis’ right side.

Calistri scored his second of the evening in the 66th minute after Rodriguez ran at a defender but lost the ball in the process. Working hard to win the ball back high up field, Calistri took the ball and quickly fired a low shot that eluded Tambakis and caught the far low corner of the net to make it 2-1.

Rising’s newest signing, Darren Mattocks checked into the match for Egbo in the 74th minute and Rodriguez unlocked New Mexico back line six-minutes later, putting the forward in on goal against Tambakis. Unfortunately for Phoenix, Mattocks’ first touch in a Rising uniform was not a goal as the striker pushed his attempt wide of the near post.

United leveled the match at 2-2 in the 80th minute when a cross from the left flank forced a punch out of Rising goalkeeper Andre Rawls. The goalkeeper stepped up to send the ball out of the box but redirected the ball off of defender James Musa and it deflected into the net for an own goal.

Moar scored the game-winner when Tate Schmitt and Kevon Lambert combined to win the ball back at midfield. Quinn took a pass from Schmitt and immediately pushed the ball forward to the right flank for Moar. The Spaniard took a touch and hit a simple, low shot to the far post that once again avoided the right arm of Tambakis and settled into the far corner of the net to make it a 3-2 final.

On his overall thoughts on the game…

I’m so proud of them. They fought. To go down a goal and come back in an emotional match against a team that wanted to beat us so badly. We weren’t playing fantastic, but once it opened up a little bit our transition got going the way it used to be and we had speed and intensity. We’re not going to let the fans down. And what do you say about Joey Calistri? Everyone in New Mexico must hate this guy. I’m sure glad he’s here with us.

Even when we gave up the own goal, I still felt we had the momentum.

All we talked about the last three days was about when we met with the medicine mad from Gila River Indian Community. In his own words, he said that we were the symbolic warriors that were going to protect this land. I told them the last few days, we need to play like the warriors they expect us to be. Gosh, when we scored that third goal tonight, I think we had four players laying on the ground. They didn’t stop. They just kept going. I’m so proud of them. They played with a lot of pride and commitment today and that’s all we can ask of them.

On getting the win tonight…

After the tough results we’ve had the last three or four games, it showed the character of this time. Despite the ups and downs, we feel like we have everything we need to be successful this season. We’ll be able to go out and win trophies.

On getting two goals in relief of Solomon Asante, who was out with an injury…

Solo [Asante] picked up a little knock so whenever it’s my time to step up, I try to do whatever I can for the team. Rick and the rest of the staff know I’m always ready. Luckily, I was rewarded tonight but it was the whole team that put in a good shift. Credit to everyone in the 18.

We knew we were playing well. The chances were coming. We just had to stay on top of them. We needed to find pockets where we could get on the ball. We were able to do that in the second half. When they equalized, I knew this team can get through adversity. We’ve had that the past few games. This game we were able to show that no matter what the scenario is in the game, we’re never going to back down.