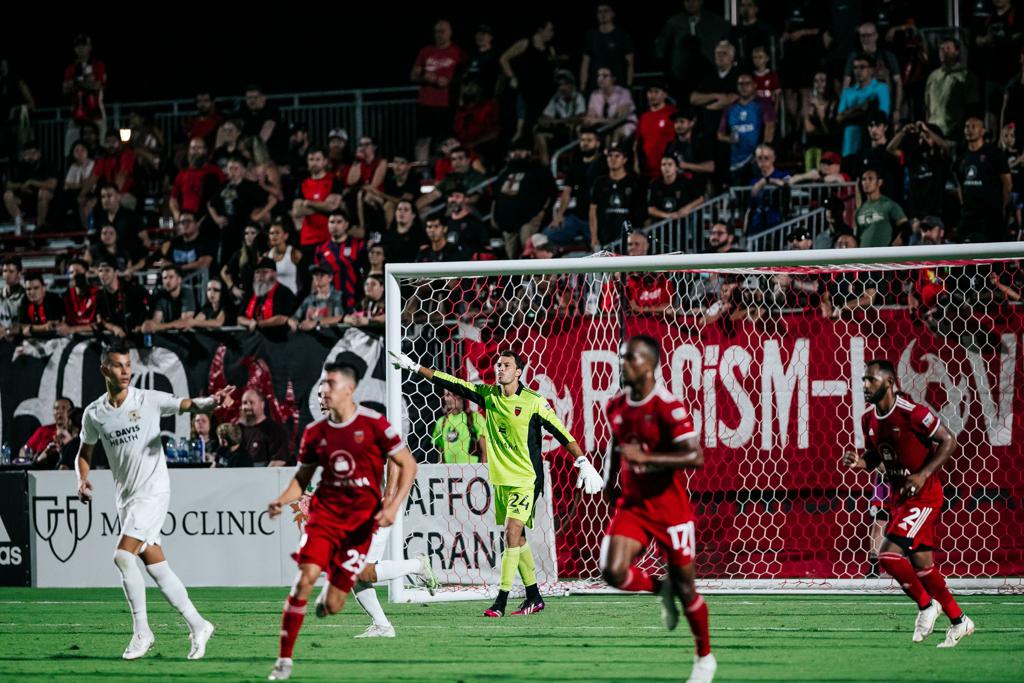 Defender Darnell King scored a highlight-reel goal in the second half on Wednesday night, but it wasn’t enough for Phoenix Rising FC (11-3-5), as the club fell 3-1 to Oakland Roots SC at Las Positas College. The loss ends the team’s 10-game unbeaten streak.
Rising returns to Wild Horse Pass this Saturday for a showdown with Mountain-Division opponent, New Mexico United. Phoenix and New Mexico will meet for just the fourth time in the regular season. The teams drew in the first two matches in 2019, but Rising finally broke through to get a 5-2 win in 2020.
Phoenix will look to get back on track and get its first win since August 4 vs. New Mexico. It will be bolstered by its home pitch, where Rising remains unbeaten (7-0-3) and has outscored opponents 29-6. Rising head coach Rick Schantz knows his team has not been on the greatest run of form as of late, and is urging his club to bring emotion and energy into the matchup.
"We know New Mexico is a talented team," said Schantz. "We played them in preseason. Troy [Lesesne] is a very good coach. Right now, we have three draws and a loss in our last four, so we’re up against it. We’re going to have to play with a lot of emotion."
"These are moments where our aggressiveness, our defending, our emotions are going to carry us through. We have to come together as a team and realize this is a big opportunity for us, at home, in front of our fans against a good, regional rival."
On the other side, New Mexico is on an unbeaten streak of its own with an astonishing five-straight draws. Two of the ties have come against El Paso, who currently stands atop the USL Championship in points with 41. New Mexico will hope to get a a spark in the second half of the season from Chris Wehan, who United recently welcomed back from Orange County. Wehan helped lead New Mexico to the playoffs in 2019 and 2020, recording 16 goals and 10 assists in his 42 regular-season appearances.

"This is actually the kind of adversity our club needs to go through to become better," added Schantz. "We need to look within. The answers are inside the organization, not outside. It’s really going to come down to going out on the field and playing with a lot of pride and emotion.

It’s not about football as much as it is about energy and desire in difficult moments. In years past, we’ve been able to put our heads down and go to work when we’re in a difficult moment. We’ve gotten through it. We’ll come out of this too. We’ll look back and be thankful for it at the end of the season."