Joe Farrell also earns place on Team of the Week 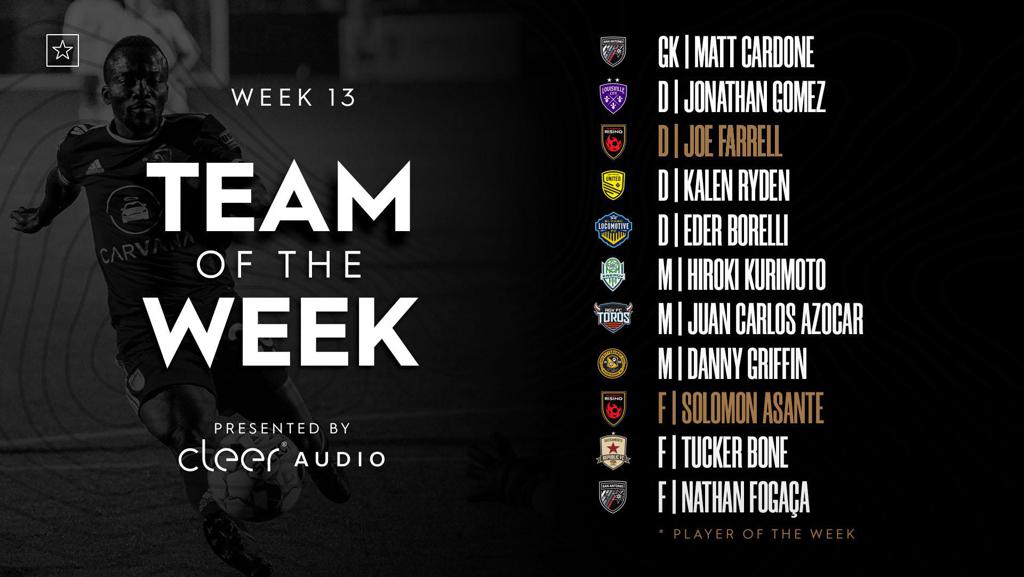 The USL Championship announced the Team of the Week Presented by Cleer Audio for Week 13 of the 2021 regular season today, with Phoenix Rising FC forward Solomon Asante voted Player of the Week after recording one goal and three assists in his side’s 5-0 victory against the LA Galaxy II at Wild Horse Pass on Saturday night.

The two-time reigning Championship Most Valuable Player, Asante has continued to shine this season with eight goals and six assists, placing him tied for second in the league in goals and tied for first in assists this season as he pursues a second double-double season in the Championship for his career. Asante’s one goal, three assist performance was the third of its kind in the Championship this season, having previously been achieved by Hartford Athletic’s Danny Barrera (6/5 vs. New York Red Bulls II) and Hadji Barry (6/16 vs. Tacoma Defiance).

GK – Matt Cardone, San Antonio FC: Matt Cardone recorded eight saves, including seven on shots from inside the penalty area, to help San Antonio hold on for a 3-2 victory against Colorado Springs Switchbacks FC on Saturday night at Weidner Field.

D – Joe Farrell, Phoenix Rising FC: Joe Farrell recorded an assist off a set piece and was strong on the back line, winning 5 of 6 duels and 3 of 3 aerial duels while making two interceptions and completing 44 of 52 passes in Phoenix’s 5-0 win against the LA Galaxy II.

D – Kalen Ryden, New Mexico United: Kalen Ryden scored the opening goal in New Mexico’s 2-1 victory against the Charleston Battery and made six clearances, won 7 of 10 duels and completed 64 of 76 passes in a strong all-around performance.

M – Hiroki Kurimoto, OKC Energy FC: Hiroki Kurimoto added a game-winning goal in the sixth minute of second-half stoppage time to an earlier assist to lead Energy FC to its first victory against FC Tulsa since 2018 while also completing 42 of 47 passes and recording five key passes on Saturday night.

M – Juan Carlos Azocar, Rio Grande Valley FC: Juan Carlos Azocar scored the opening goal in the Toros’ 2-0 victory against Orange County SC on Saturday and then played a fine game throughout, completing 29 of 30 passes and five key passes for the visitors at Championship Soccer Stadium.

M – Danny Griffin, Pittsburgh Riverhounds SC: Danny Griffin had a big game in the center of midfield for the Hounds in their 1-0 win against Loudoun United FC, winning 8 of 13 duels and 4 of 5 tackles while also making 15 recoveries and six interceptions.

F – Solomon Asante, Phoenix Rising FC: The two-time Championship MVP became the third player this season to notch one goal and three assists in a single game and completed 17 of 21 passes overall to lead Phoenix Rising FC to a 5-0 victory against the LA Galaxy II on Saturday night at Wild Horse Pass.

F – Nathan Fogaca, San Antonio FC: The Brazilian scored a pair of goals and had seven shots overall and also completed 15 of 16 passes and completed 2 of 2 dribbles as San Antonio broke a seven-game winless streak with a 3-2 win against Colorado Springs on Saturday afternoon.