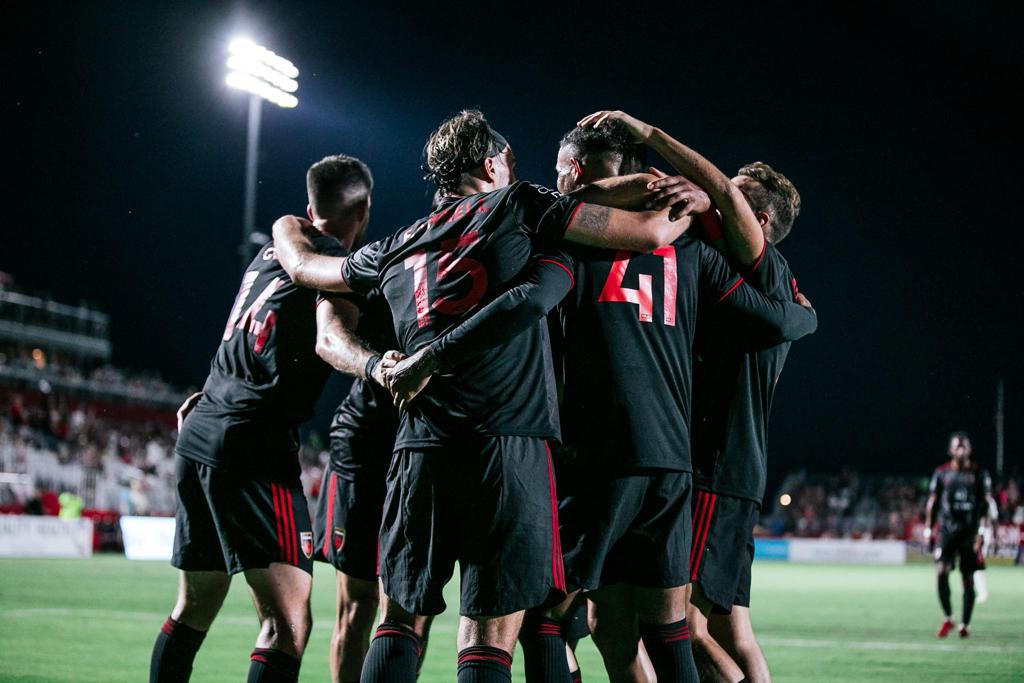 PHOENIX, Arizona (Saturday, July 17) – Phoenix Rising FC improved to 8-2-2 on the season and 6-0-1 at Wild Horse Pass with a decisive, 5-0, victory against LA Galaxy II tonight.

Solomon Asante led the way for Rising with a goal and three assists, while Rufat Dadashov and David Egbo also found the back of the net for Phoenix, which now leads the Pacific Division table with 26 points.

Asante won a free kick at the top of the area for Rising in the 18th minute of the match. Slightly off center to the right side and 20-yards from goal, Asante and Aodhan Quinn stood over the ball before the captain curled a shot over the wall and beyond the reach of LA Galaxy II goalkeeper Eric Lopez. Unfortunately for Asante, the attempt cracked off the woodwork and was ushered away from danger by a defender.

Asante earned another set piece for Phoenix in the 33rd minute. Quinn stepped in to curl a left-footed ball to the back post, where Kevon Lambert rose above the crowd to nod a pass back into the center of the six-yard box. There, James Musa found himself alone and redirected a header past Lopez to make it 1-0.

Asante got a tap-in to make it 2-0 in the 40th minute when Rufat Dadashov held up the ball in the left corner of the box near the end line. Phoenix’s No. 9 drew multiple defenders while Asante slipped in at the back post unnoticed. Dadashov made a brilliant pass to the center to the two-time defending league MVP, who tapped a low shot into the corner for his team-leading eighth goal of the season.

Seconds later Joe Farrell got back defensively to save a shot off Rising’s goal line and preserve the two-goal advantage. Back at the opposite end, Asante returned the favor to Dadashov and centered a pass to the wide-open striker in the 45th minute. The quick turnover deep in Los Dos’ third of the pitch left Lopez and the rest of the Galaxy II defenders helpless and Dadashov made it 3-0 just before the halftime whistle.

Asante picked up his second assist of the match in the 78th minute when substitute David Egbo came free at the far post. Asante sent a long, 35-yard cross to the back post, where Egbo dove to drive a sharp header past Lopez to make it 4-0.

Egbo scored his second after Asante poked a pass forward into the space between Lopez and the last LA defender in the 90th minute. Egbo beat Lopez to the ball by a step, pushed the ball into space behind the goalkeeper and was in alone on goal with 50 yards to transverse. The forward tapped the ball a few feet from goal before firing a hard shot into the empty net to finish the match, 5-0, in favor of Rising.