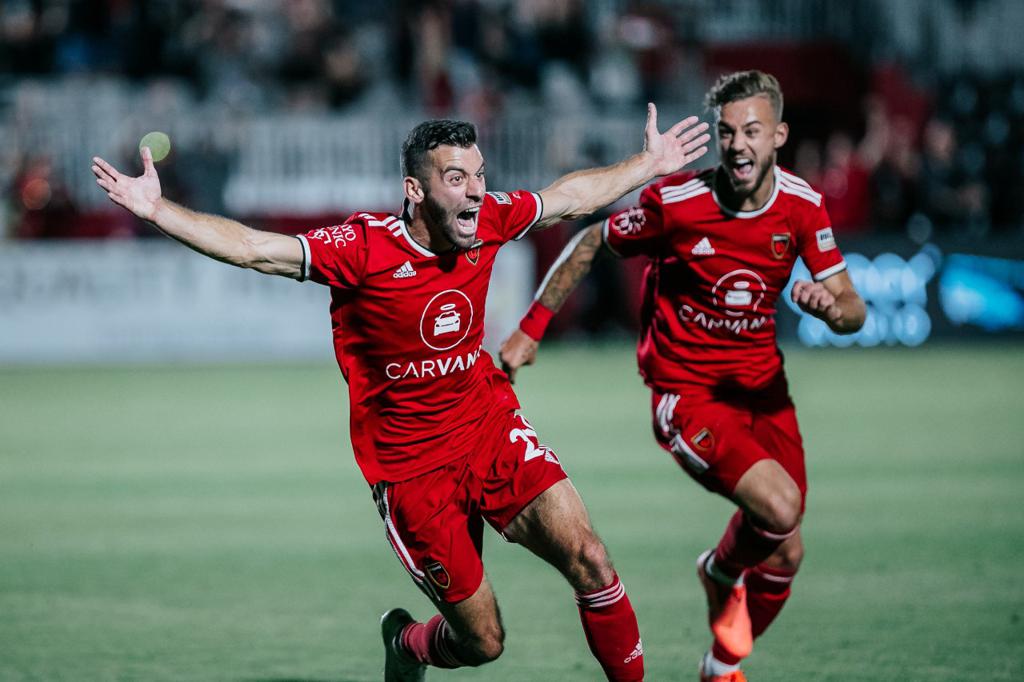 The match was played in front of a club record crowd of 8,058 fans, eclipsing the previous record of 7,707 from October 2018. Santi Moar extended his goalscoring streak to six matches, one off the club record of teammate Solomon Asante from 2019. Joey Calistri scored the game-tying goal at the death, his first of the season in his first start.

The match began with Solomon Asante earning a free kick at the top of the box in the 15th minute. Asante stepped up to take the ensuing set piece and tried to pick out the top corner of the goal behind San Diego goalkeeper Trey Muse, but his attempt floated just wide of the post.

San Diego went ahead 1-0 in the 19th minute of the match when Miguel Berry outmuscled his defender and won the ball back at the top of the area. The Loyal SC striker went straight at goal and drilled a line-drive shot past Rising goalkeeper Andre Rawls and into the far side netting.

Rising nearly got back on level terms in the 66th minute when Jon Bakero popped a pass backwards to Santi Moar at the top of the area. On a five-game-scoring streak, Moar cut inside, across the top of the box and ripped a hard shot high towards the back post. Unfortunately for Rising the attempt whizzed just over the bar. Less than a minute later, second-half substitute Seyi Adekoya cracked a hard shot that had Muse beat but rattled off the near post and skipped away from danger.

San Diego took a 2-0 lead in the 71st minute when a ball played in from the right flank by Collin Martin found the feet of Jack Blake at the top of the box. Blake cut to his right side before firing a hard shot into the top corner of the net behind Rawls.

Arturo Rodriguez had a shot deflect into the path of Moar in the 91st minute. The league’s leading goal scorer jumped on the rebound, firing a hard shot past Muse to make it 2-1 with six minute of stoppage time left.

Rising threw everything forward in search of an equalizer, nearly getting a goal out of goalkeeper Andre Rawls, who attempted a volley at the back post seconds prior to Calistri sending the 8,053 fans in attendance into a frenzy. On the sixth corner Rising produced after Moar’s goal, Rodriguez lobbed a ball to the back post, where Calistri wound up and waited for the ball to fall into his full-volley strike, that beat Muse to the back post, making it a 2-2 final.