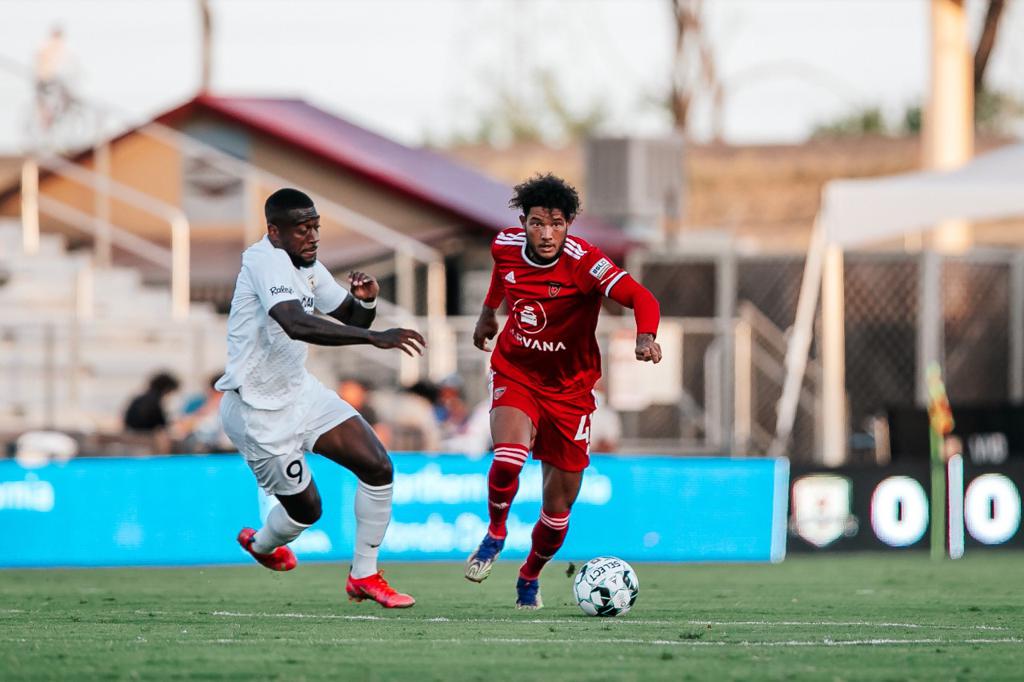 SACRAMENTO, California (Saturday, May 29) – Phoenix Rising FC improved to 4-1-0 on the year with a 1-0 win against Sacramento Republic tonight at Heart Health Park. Santi Moar scored in his fifth straight match to lead the way for Rising, which picked up its first win in six attempts all-time in Sacramento.

The Pacific Division leaders return to Wild Hose Pass next Saturday, June 5 at 7:30 p.m. vs. San Diego Loyal SC. That match will be Rising’s first full-capacity match at its new home. Tickets are still available for that match at PHXRisingFC.com

Jon Bakero and Santi Moar combined to set the table for Solomon Asante in the 18th minute of the match. Moar split a pair of Sacramento defenders with a sharp pass across the top of the area and Asante had time to settle the ball before firing a shot that looked destined for the back post, but a Republic defender jumped in front of the shot to keep the match level, 0-0.

Rufat Dadashov did very well to get his volley attempt on target in the 23rd minute, when Asante served in a lofted pass to the near post. Phoenix’s No. 9 stretched out and around a defender to poke a shot on goal, but Sacramento goalkeeper Tomas Gomez got up, high to his left side to make the save.

Sacramento fired back just before halftime when Shannon Gomez crossed the ball into the area for Kharlton Belmar. The Republic striker tried to pick out the far side netting, but fortunately for Rising, Tobi Adewole was alert and able to jump in front of the shot to block a sure goal for the home side.

The match opened up at the start of the second half and both teams had chances to take the lead by the 50th minute. Rising’s other center back, James Musa headed away a second opportunity Sacramento had to go ahead in the 50th minute when Dariusz Formella tried to pick out the inside of the back post.

Ryan Flood sent a sharp pass to Aodhan Quinn to start a counterattack for Rising in the 62nd minute. Quinn opted to fire a shot from distance, pulling Sacramento’s goalkeeper off his line to make a diving save to his right. The rebound fell to Asante who centered the ball to Moar for the one-touch finish to break the deadlock.

Phoenix’s defense closed out its first road win of the of the season by allowing zero shots on goal through the full 90 minutes.