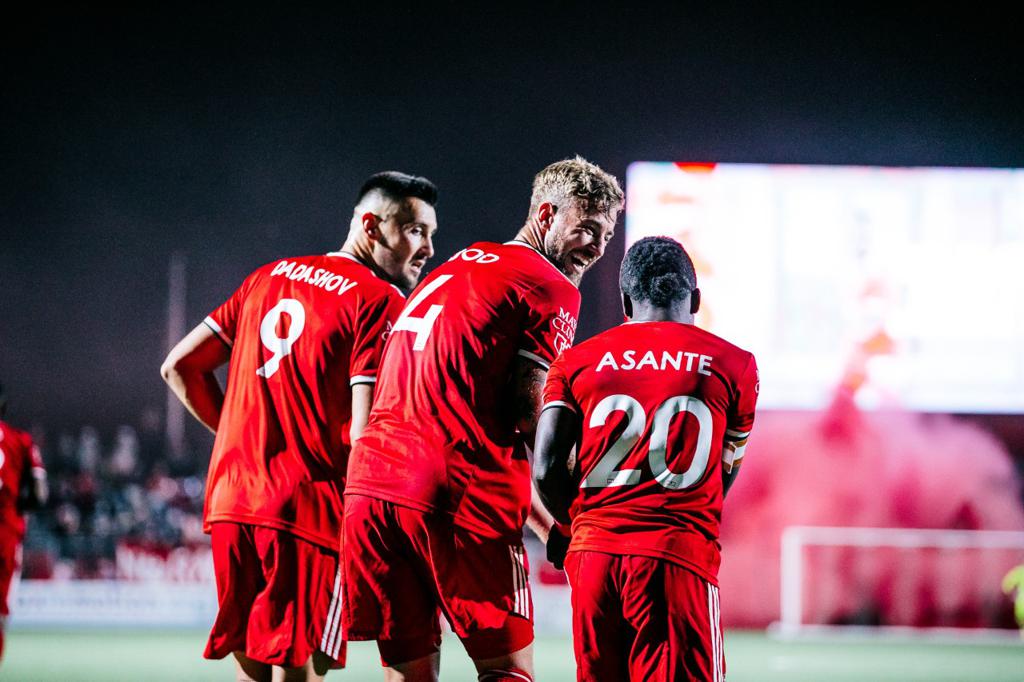 Rufat Davdashov found the back of the net twice to lead the way for Rising. Joe Farrell, Santi Moar and Solomon Asante also made their way onto the scoresheet. The defending Western Conference Champions improve to 3-1-0 on the season and will open up to 100% capacity for its next home match, a Saturday, June 5 tilt with San Diego Loyal SC.

Rising got on the board in just the second minute when Noah Billingsley, making his first start of the season at right back, centered a pass to Dadashov in the center of the box. The pass was played in on the ground and Phoenix’s No. 9 had time to collect the ball and strike a spinning shot past Lights FC goalkeeper Alexander Rando.

Las Vegas fired back in the 11th minute, when a turnover opened the door for Lights FC’s Caleb Jennings. The striker sprinted towards the back post before firing a low shot towards Rising goalkeeper Andre Rawls’ left side, but the goalkeeper got enough on the shot to send it over the bar.

Dadashov nearly got his second of the match in the 13th minute, smashing a hard shot off the back post for the second time this season, but once again, a turnover in a bad spot gave Vegas’ Jennings a chance to equalize. This time the striker took advantage, lobbing a shot over Rawls’ left arm to make it 1-1 in the 22nd minute.

Also making his first start of the season, Farrell put Rising up 2-1 just before halftime when Asante curled a corner kick to the near post. Farrell was there and rose above the crowd to head a shot past Rando.

Rising stepped on the gas in the second half and quickly added three more goals by the 63rd minute. The first came from Moar, just six minutes into the half, when a clearance attempt by Vegas was popped up into the air at the back post. Moar settled under it and laced a volley around a Vegas defender that caught the far side netting.

Dadashov added his second in the 54th minute following a Rising throw-in on the right flank. Jon Bakero got the ball to Dadashov in the center. With his back to goal, the Azerbaijan international moved to his left and found an opening to rip a shot into the top of the net to make it 4-1.

Solomon Asante sent Rando the wrong direction on a penalty kick, which was earned by Ryan Flood in the 63rd minute to make it a 5-1 final.

When we play with confidence it’s a pretty special group of players. We started well. That was the idea, to get after them fast. We made some silly mistakes after that and lost our confidence for a bit in the first half.

I talked to them at half about being more intelligent. Kevon [Lambert], Aodhan [Quinn] and Jon [Bakero] were picking up the ball in the wrong places. After we had that talk, we did a much better job.

It’s funny. I promised him he would score if he made front-post runs. The plan was to get as many crosses in as we could. I was so happy for him.

Credit to Vegas and LAFC, they play a very attacking style of football. We wanted to press them. We wanted to try and make it difficult for them. Defensively for us, we put a lot of pressure on them to handle difficult moments. Vegas does the same, but we were just able to capitalize.

On his halftime talk to the team…

They knew I was disappointed. We practiced all week on not playing any short corner and I think we took four in the first half. I told them they need to listen and trust us. The possession… We had to drop our six a little deeper to be able to play through the lines. We needed to not play into the middle as often as we were doing. We went around them. Ryan [Flood] and Darnell [King]… What a pro Darnell was [coming off the bench at half]. Both were fantastic.

On scoring in his first start of the season…

Anytime we get the opportunity to play in front of our home fans is great. I felt blessed to be able to be on the field tonight and to get the win. I would have liked the shutout to go with it but the goal feels nice as well.

I just try and get myself in good positions. I know with the quality of our team, the ball is going to be in a good place. I just try and get in front of the defenders or the goalkeeper and make it hard for them to clear it. I have a little experience in college playing striker so I kind of try to cause as much havoc as I can. Thankfully I was able to get my head on one and get a goal.