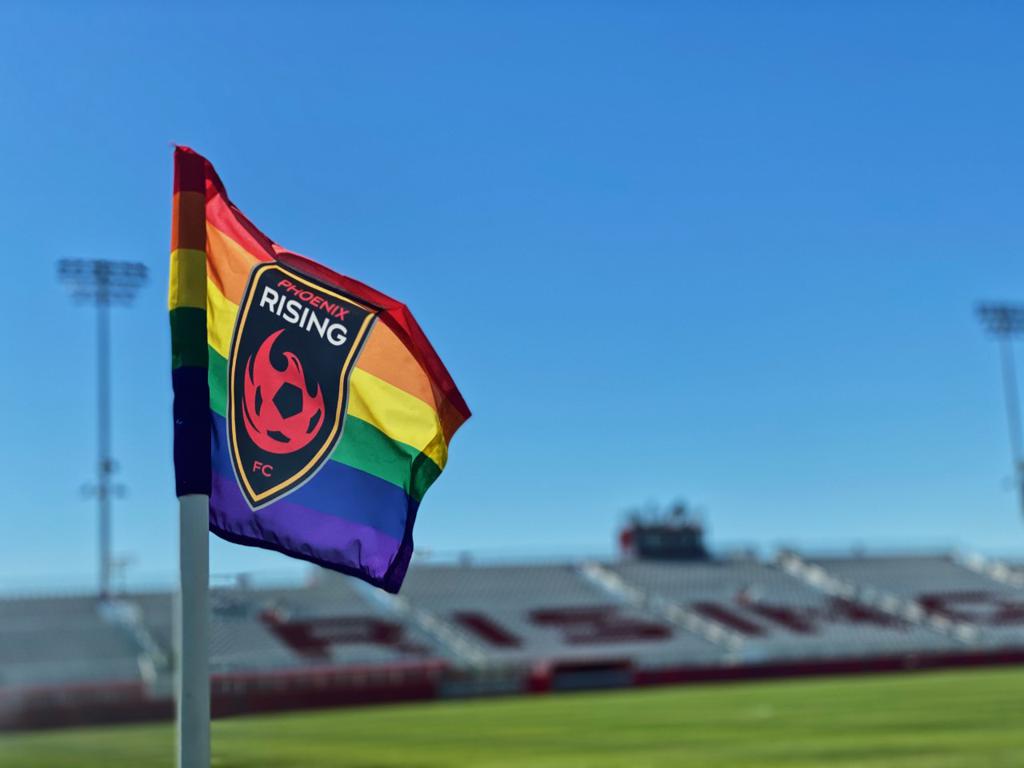 Rising fans are encouraged to stick around for the flag football game, which will begin at approximately 9:30 p.m.

The Common Goal and USL led initiative is an extension of the diversity, equity, and inclusion league-wide training and education seminars participated in by all USL HQ staff, and USL Championship and League One teams conducted by the Institute for Sports and Social Justice. The teams will partake in a series of individual and combined three-hour sessions over the course of the 2021 season. While the content of these sessions will remain between the participants themselves, the goal for all parties is to move beyond the traditional retribution-based narrative around homophobic and racial abuse. This innovative approach looks to collectively reflect, reconcile, and evolve as individual players, clubs, and as a league.
“What makes this endeavor incredibly unique is the fact that USL is actively modeling the behavior needed to reconstruct in a real and transformative way,” said Common Goal’s Lilli Barrett-O’Keefe. “Both clubs and the league know this is a massive opportunity to restore and reconcile. This should become the standard for how all teams handle such conflicts. Only by working together can we create safe spaces where we all can thrive, as individuals and athletes.” added Barrett-O’Keefe.
The contest – which will see the official opening of Phoenix’s new 10,000-seat venue at Wild Horse Pass – will also include special activations including Forever Proud captain’s armbands and corner flags. Following the game, the armbands and corner flags will be auctioned, and the proceeds will be donated to local LGBTQ+ organizations.
“It’s very encouraging to see this situation come full-circle and witness the positive changes that are happening as a result,” said Phoenix Rising FC Governor Berke Bakay. “Coach Schantz’s actions at our last match with San Diego Loyal were the catalyst for change and understanding not only within himself, but throughout our organization. Since then, we have listened to and worked with multiple LGBTQ groups and individuals to not only understand the difference between tolerance and acceptance, but to learn how we can continue to grow as allies. To punctuate that point, we have added inclusion as one of the core values of Phoenix Rising FC.”
In addition, both teams will sign ONE Community Arizona's inclusivity pledge at halftime of the contest. The teams will also come together prior to the opening kickoff for a moment to show solidarity with the USL’s recently launched Forever Proud project, created to reinforce USL’s commitment to social impact initiatives including support and advocacy for the LGBTQ+ community and to provide a safe, inclusive space for all fans.
In the build up to Friday, in collaboration with PUMA and The Trevor Project, USL HQ has also released a long-form interview with current SD Loyal midfielder Collin Martin, one of the few openly gay men’s soccer players in world football. In an in-depth discussion, Martin discusses coming out publicly as a gay athlete, being present in other people’s growth, and how allyship can broaden the impact of change in communities.
“The Season Opener is exciting for our community and our fans because, simply put, we’re ready to play,” said San Diego Loyal Chairman Andrew Vassiliadis. “Following last year’s incident, the match also provides a healing opportunity for Collin, our players and the LGBTQ+ community. We’re grateful and proud that the League and Phoenix Rising are listening, educating, and taking action alongside us. Our collective efforts will help us be better organizations and better community partners going forward. We can’t wait to meet on the pitch this Friday not only as good soccer players, but even better human beings. Go Loyal!”
Following Friday’s match, Phoenix Rising FC will host the championship match of the Phoenix Gay Flag Football League (PGFFL) and will debut at halftime an inclusivity video shot in collaboration with Forever Proud partners You Can Play.
“We continue to look for ways to make USL a more inclusive and community driven league,” said USL President Jake Edwards. “It’s important for us to move beyond just punitive measures and also look inward to find ways to get to the root of the issues themselves. We appreciate the leadership Phoenix Rising and San Diego Loyal have shown and are grateful to our partners PUMA, the Trevor Project and Common Goal for helping to make our league a better place.”
About ONE Community
In February 2013, ONE Community launched the UNITY Pledge – a concerted effort by Arizona businesses, organizations, faith leaders, and individuals to advance workplace equality and equal treatment in housing and public accommodations for Lesbian, Gay, Bisexual, and Transgender (LGBTQ) individuals and their allies. In February 2014, SB1062 began making headlines. ONE Community was in a unique position to reach out to our UNITY Pledge signers and encouraged them to share what they know – that discrimination is bad for business and bad for the State of Arizona.
We partnered with ONE Community business member, FASTSIGNS on Central, to create the OPEN for Business to Everyone signs. During the peak of SB 1062, we distributed more than 3500 signs in less than 72 hours and the sign was shared more than 100,000 times on the internet, garnering national attention. This campaign, along with the efforts of our partners, was integral in encouraging our governor to veto the bill, and a movement was born. Since that time the UNITY Pledge has become the largest equality pledge in the nation. About You Can Play The You Can Play Project works to ensure the safety and inclusion for all who participate in sports, including LGBTQ+ athletes, coaches and fans. We achieve this by creating a community of allies that is able to foster a true sense of belonging. This becomes possible when sports teams sharpen the focus on the person’s skills, work ethic, and competitive spirit, not their sexual orientation, gender identity or expression. You Can Play seeks to challenge the culture of locker rooms and spectator areas by developing a culture of respect, in every player, coach and fan.

About the Phoenix Gay Flag Football League
The mission of the Phoenix Gay Flag Football League, Inc. (PGFFL) is to provide Members of the Phoenix LGBTQ and Allied Community a safe place to experience personal growth while pursuing their athletic aspirations in a healthy environment, free from harassment and ridicule. The PGFFL strives to use its fundraisers, cultural events, and the sport of flag football to break down stereotypes, eliminate prejudice and discrimination, and to educate the general public about the LGBTQ community.