Rising Splits a Pair of Friendlies with Switchbacks FC 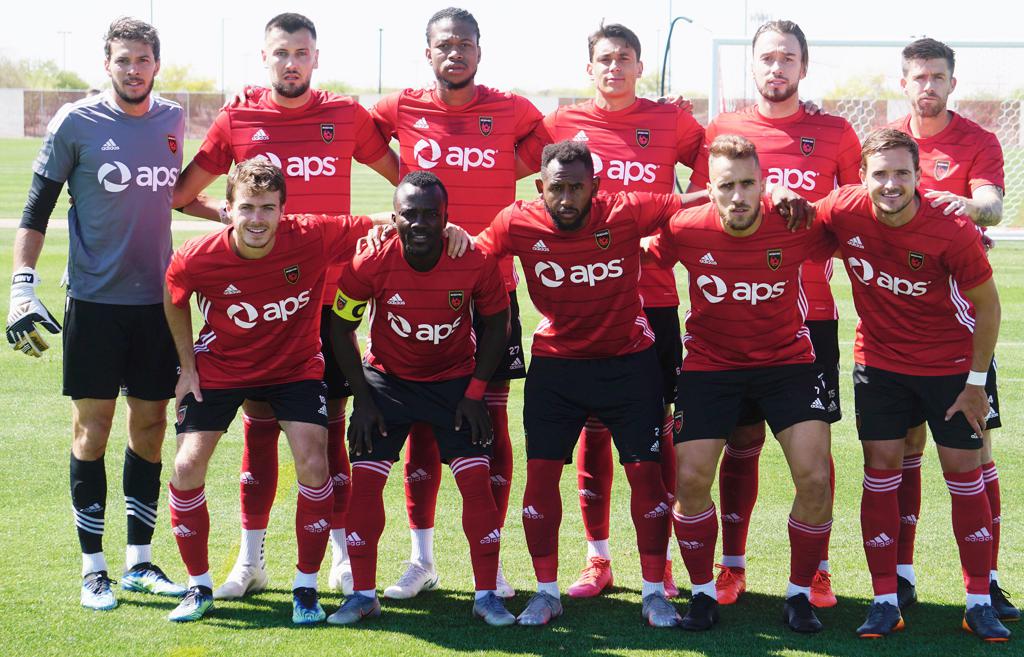 “The first group was not good and the second was fantastic,” said head coach Rick Schantz after the matches. “I’m happy with our depth but we’ve still got some things to work on. We were out-worked, out-hustled and didn’t feel like playing [in the first game]. We played a young, aggressive, hungry team and we got spanked.

“The second group was humble,” added Schantz. “Colorado played with such high pressure that we needed to play in behind them. The first group thought they could play through the pressure and they made too many turnovers. I’m really proud of that second group. Prince was very dynamic and Seyi has shown he is humble and willing to work.”

Colorado scored in the 16th minute to begin the first match. The key to the play was a long pass that started a counter attack. The ball was played up the left flank into space, allowing the Switchbacks striker to pick up his head a fire a shot, high over the left arm of goalkeeper Andre Rawls.

Santi Moar earned a free kick in a dangerous area for Rising in the 22nd minute. Aodhan Quinn stepped up to hit a left-footed curler towards the post, but the attempt from 25 yards out skipped just wide of the goal.

Colorado went ahead 2-0 in the 30th minute when another counterattack caught Rising too far forward. Rawls did very well to stop the first attempt but the rebound was finished off after the goalkeeper made a diving save to his right side.

Dadashov made it a 2-1 game in the 37th minute on a penalty kick, which was awarded after Solomon Asante picked off a pass inside Switchbacks FC’s box and was immediately taken down by a defender.

Rising’s first group looked to have righted the ship and were off to a great start in the second half when Asante chipped a ball into the area that was headed off the woodwork by Dadashov. The rebound came back to the striker’s feet and he struck a hard shot, but his second try was saved by the goalkeeper. The rebound was pushed directly into the path of Darnell King and the defender cracked another hard shot on goal, but Switchbacks’ goalkeeper came across his line to make another outstanding save and keep the match at 2-1.

That was as close as the group would get as Colorado struck for a third time on the counterattack just before the 75th minute. King did well to get back and defend the rush, but was unlucky as the ball deflected off his shin and skipped into the back of the net for an own goal.

Arturo Rodriguez picked up his first assist of the day in the eighth minute of the second match, when he got the ball wide to Saydee. The forward cut inside and struck a hard shot, low to the goalkeeper’s left side from 20 yards out to make it 1-0.

Joey Calistri put Rising ahead, 2-0, in the 15th minute when a clearance attempt from Colorado popped out to the top of the box. Calistri waited for the ball to sit up perfectly for him and then cracked a line-drive shot, low and into the corner from just beyond the edge of the area.

Another ball from Rodriguez unlocked Colorado’s defense for a third time in the 35th minute. The former USL League One MVP played a perfect long pass onto the foot of right winger Ivan Gutiérrez. Gutiérrez then cut inside-out to shake his defender before accelerating and beating the ‘keeper to make it 3-0.

Saydee got in-behind Colorado’s defense again in the 45th minute. This time the forward slowed and knocked a centering pass into the six-yard box for Adekoya to finish off, making it 4-0.

Saydee scored his second in the 58th minute. The forward blew by a Colorado defender on the left side before finishing a high and hard shot over the shoulder of the goalkeeper to make it a 5-0 final.