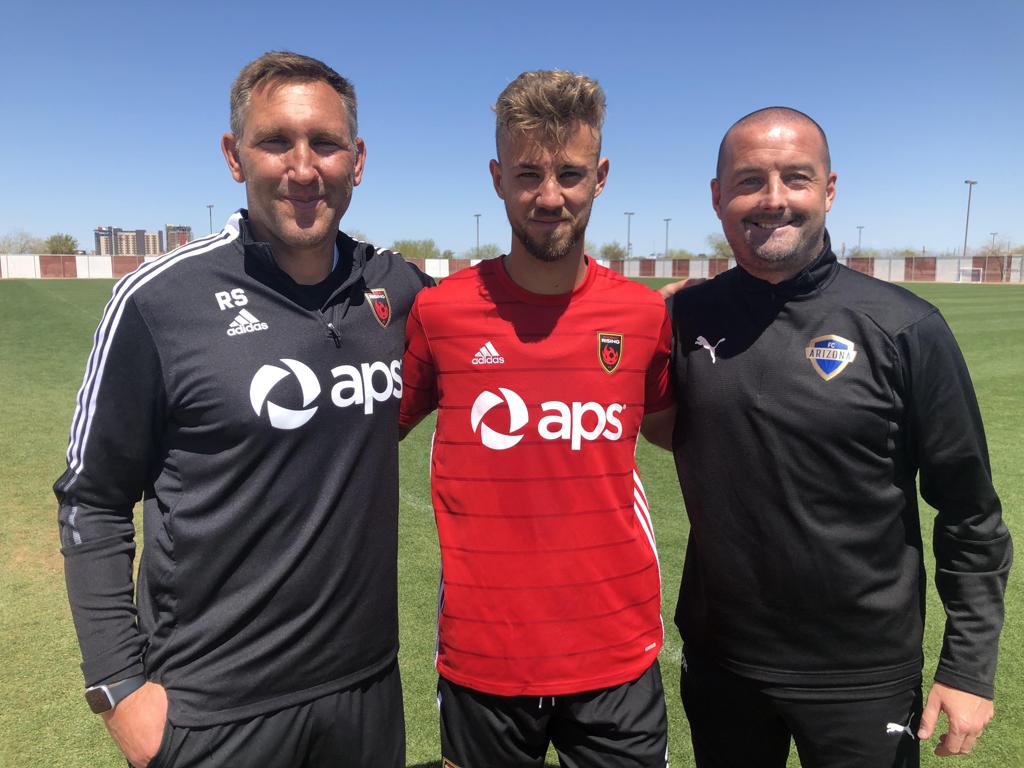 Phoenix Rising has signed FC Arizona product Ryan Flood, pending league and federation approval, the club announced today.
“Ryan Flood is one of the best stories you can find,” said Rising head coach Rick Schantz. “He has tried out for Phoenix Rising three times now. The first two, he returned to FC Arizona and continued to work hard under Dave Rogers. He has been rewarded because of his no-quit attitude and strong desire to be a pro. His journey is just beginning. He is a big, strong left-sided player who gives us depth. He has amazing range as a passer.”
Flood, 22, grew up playing youth soccer in Arizona. He starred at Corona del Sol High School in nearby Tempe. Following high school, Flood traveled to Brazil and Japan in pursuit of a pro career before returning to play for FC Arizona. Flood was the co-leading scorer for FC Arizona last season.
“I am absolutely delighted to see Ryan sign with Phoenix Rising,” said FC Arizona technical director Dave Rogers. “A local boy from Arizona has the chance to progress his career at the best USL club in the country. Ryan’s work ethic and desire to learn has earned him this fantastic opportunity. This is a really proud moment for FC Arizona, our owner Jamie Landreman and myself. We wish Ryan every success on his new journey.”
Flood played as a left winger with FC Arizona in 2020. He has been on trial with Rising since the defending Western Conference Champions first convened on March 6. Flood saw time at left back vs. Union Omaha on March 24. He played as a forward in Rising’s most-recent preseason match, also against Omaha, on March 27.
“It feels fantastic to sign with my hometown team,” said Flood. “FC Arizona created a professional pathway and culture for players like myself to showcase our talent. I will be forever grateful to Dave Rogers and owner Jamie Landreman. The journey was good for me and I wish FC Arizona all the success in the future. Going away and growing as an individual, growing into my boots as a professional player… I needed that. Seeing different things about the game and being able to understand how grown men play soccer instead of kids…It made a huge difference for me to see that as a teenager.
I played against Rising in the U.S. Open Cup and I know what that fan base is like. It was amazing to see that in my hometown and to play in front of fans that are heckling you. Signing with the team now, I feel like it will be like coming home. Being able to connect with the fans that already know me a little bit… I hope to quickly establish a strong connection.”