Piecing It All Together

How head coach Rick Schantz readies his roster for the season 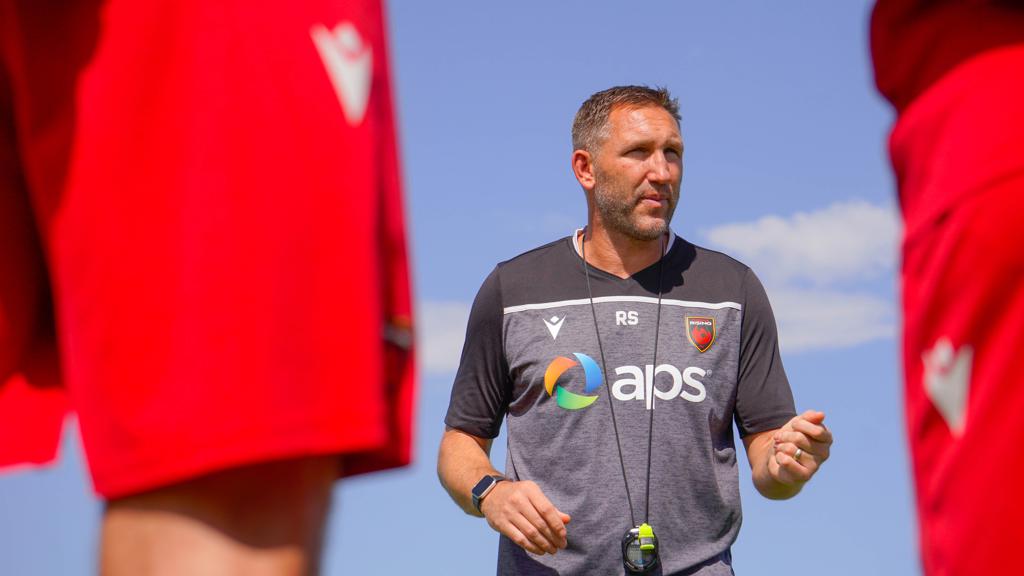 Head coach Rick Schantz addresses the team during a training session in the 2020 season.

Less than 40 seconds remained in a match Rising was leading, 1-0, on the road in Las Vegas on September 5, 2020. Lights FC goalkeeper Thomas Olsen quickly put the ball back in play only to have Jordan Schweitzer intercept the goal kick and instantly put Rufat Dadashov in on goal. The striker calmly finished the chance to let the air out of a growing concern that Rising could not close out matches on the road.

Just two weeks prior, Rising had seen a 3-1 lead evaporate in stoppage-time against the same Lights FC side. Phoenix followed that performance up with a 2-1 loss in Reno, bringing its road record to 1-2-2 on the year. A pivotal moment in Rising’s 2020 season, the club badly needed to prove it could grind out a victory on the road in Vegas, but it wasn’t the only thing on head coach Rick Schantz’s mind. Rising’s 2021 season had already begun.

“Our first step is when ownership tells me what we can and cannot do for the upcoming season” Schantz said. “We look at players and what their upcoming season contract stipulates. We look at how that impacts the team.”

That’s where Schantz’s road map for the ideal team comes into play. Schantz has a specific profile in mind for every position on the pitch. It’s up to him and his staff to find the right players who fit those profiles.

Players on multi-year deals or who negotiate another contract will take up a percentage of spots before the offseason really gets going. Heading into the 2019 season, Rising returned 13 players from the previous squad, an impressive number for a league with high turnover. This season, eight players are returning from the 2020 season.

From that point, Schantz’s map helps guide the scouting and conversations he and his staff have to fill out the roster. His preferences may change over time, but Schantz is heavily influenced by what’s been successful in the past to help build his future.

“What kind of fullbacks do I want,” Schantz said. “Fast, athletic, good passers, (who are) aggressive and tenacious. Somebody that will destroy the will of a winger. I don’t want an attacker to feel comfortable. Darnell King. Amadou Dia. Mustapha Dumbuya. We’ve had some great fullbacks that fit those characteristics.”

And so it goes with every other position on his map.

“Ok, what do I want my central midfield to be like?” Schantz said. “I want a powerful, strong, ball-winning player. I want somebody that can cover a lot of ground. Someone that’s good in the air because we’re going to have to win balls in the air and win second balls. All of a sudden, boom, there’s Kevon Lambert.”

Schantz regularly talks about having two starter-quality players available at every position on the pitch. His player map helps him achieve his goal. In addition to having the piece he wants in place or trying to fill a hole, Schantz is also thinking about the future of the club. He points out new signees Ivan Guiterrez and Arturo Rodriguez.

“Both are very young and dynamic,” said Schantz. “Exciting players we brought in with the idea that as much as much as we’d love Santi (Moar), Rufat (Dadashov), and Solo (Asante) to play forever, we also need to be training younger guys to develop the future stars of Phoenix Rising.”

Once Schantz lays out the players he’s looking for, his staff and the front office reach out to their contacts to let them know the players Rising is seeking. Once a target is identified, the club’s GM, Bobby Dulle, will formally reach out to the player’s agent to begin discussions about coming to Phoenix.

According to Schantz, word of mouth among players within the league has made Phoenix one of the league’s premier destination for free agents. Figuring out if a player wants to come to Phoenix is usually the easy part.

Contract negotiations follow and by the time a player is ready to sign on the dotted line — hours of scouting, conversations with former coaches, teammates and a one-on-one conversation with Schantz has already taken place.

For the head coach, fitting in with the club’s culture is just as important as fitting into the club’s system on the pitch.

“It’s so important for us to know what kind of character we’re bringing in,” Schantz said. “There are times in a season where they are not playing. There are times in a season where we’re not winning. It’s 120 degrees and the last thing you want is to go out there and train knowing that you may not play on Saturday. That’s going to really test you. It’s going to bring a player’s true character to the surface. It’s extremely important to me we have good guys in the locker room. We have great leadership. We have a great experience. But most importantly we have players who are just good people.”

Schantz said that sometimes the very end of negotiations is the toughest part. Despite the months, days, and hours poured into bringing a player to Phoenix, a finished contract may ultimately go unsigned.

Heading into his third full offseason as the club’s head coach, Schantz is confident in the system he’s building on the pitch, the culture he’s building in the locker room, and the future he’s setting up for Phoenix Rising.

“I was so worried I would let the fans down,” Schantz said. “I was so worried I would let my family down. I’m still afraid to lose but I am more motivated to be successful. I’m motivated to win and more motivated to give the fans what they deserve because we know we can do it. With experience you get confidence. Over time, every day, I’m learning a little bit more about this process but at least now I feel I have a clearer picture of what can be successful in this league.”