From Scotland To Arizona 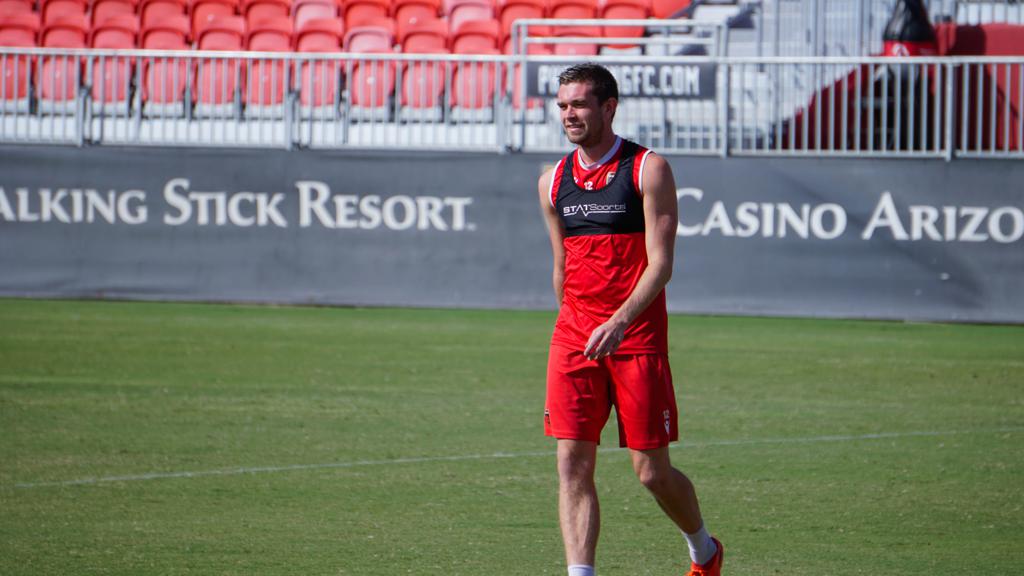 “I played in Scotland for almost 10 years," Stanton said. "It was a lot of playing in the same places, playing the same teams. Joining Phoenix Rising was a really exciting opportunity for me. I wanted to get to experience a different style in a different region. It’s been difficult in terms of the weather. It’s obviously extremely hot. Back home, you don't get that sort of heat at all. Obviously, the whole virus and stuff didn’t really help, it just made it harder for me to get used to Arizona.”

Heating up just as the playoffs were coming into view, Stanton will play a key factor in this 2020 postseason by adding an additional goalscoring threat to fill the absence of 2020 Golden Boot Winner Junior Flemmings.

Stanton scored a brilliant, first-touch goal vs. San Diego on September 30, prior to the league ruling the match a forfeit. He added his first brace of the season in his next match, picking out the far upper corner of the net with another first-touch strike before being in the right place at the right time to finish off a rebound chance. Both goals were created by 2020 Assist Leader Solomon Asante.

“Stanton is probably in the top four or five as far as quickness on this team,” said Rick Schantz earlier in the season. “If you watch him when he turns on those afterburners, man, he can really move. For a midfielder that can run 11 kilometers a game, he can also hit high nines and low 10-meters-per second. That's pretty impressive. Also, if there's a loose ball, Sam can beat the guy to it. That allows us to counter-press and stay on top of an opponent."

After beginning his career in Scotland as the youngest player in Hibernian FC history (16), Stanton only appeared in five matches during the next two seasons.

“It was a privilege for me and it was an exciting time,” Stanton said. “When you're younger as well, you just go out and play well right away. You need to work at it. It's only a chance to make something of yourself and make a career out of it.”

“Just the experience, [leaving] and coming back... it was just good timing for me,” Stanton said. “Just through experience week-in and week-out in proper football. When I came back, it was my experiences that made a difference. I learned a lot more about the game. I was trusted a little bit more by coaches because I was a little bit older.”

“It wasn’t too bad," he said. "When you’re younger, it was more exciting for me. I was going to play proper football games instead of playing with the U-21 team. It gave me a lot of learning experiences, at a good and young age. By the time I actually moved to Dundee United, I had a lot of experience. It can be challenging at times, late nights in different parts of the country. It was difficult, but as long as I was playing football, I had no problem with it.”

Stanton had a career year in his first season at Dundee United. He appeared in 48 games and played nearly 3,800 minutes, Stanton scored seven goals and eight assists.

“My last year there, before I signed [with Phoenix Rising], was probably my best year,” Stanton said. “Obviously, I only played half the season due to injury but, we won the league. The second year I was injured for six-to-eight weeks and they changed the manager, so he was trying to figure out who's going to play and stuff like that. For myself, it was really good just because I was playing every single game it seemed like. I just had a really good time at Dundee United.”

After the 2019 season, Stanton made the life-changing decision and Rising announced Stanton had signed with the team on Jan. 23, 2020. Stanton wanted something new when he decided to leave Scotland to come to the United States to play for our club.

"Sam was a player that I really liked," said Schantz. "I watched him when he was playing in Scotland. He's a very forward-thinking midfielder. He likes to make runs in-behind, which is evident of the goal that he scored [vs. Las Vegas on September 11]. That's important for us because of the way we play.”

In terms of adjusting to his new club, teammates and fan base, Stanton has loved it all.

“They’ve been brilliant ever since I signed,” Stanton said. “It all made me feel welcome, certainly. All the players and coaches have been great with me. It's been really nice so I’m very thankful for that.”

So, with the first sub-95 kickoff-time temperature of the shortened and reshuffled 2020 season set for this Saturday's matchup, Arizona is beginning to feel more like home for the Scotsman. More importantly, he could be heating up at just the right time.