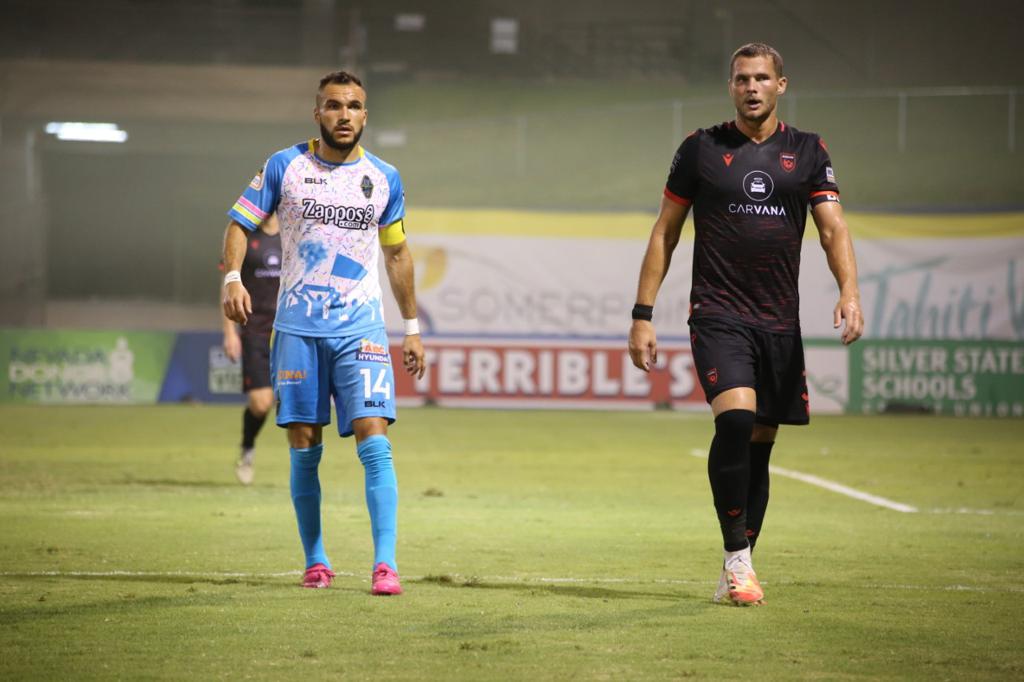 LAS VEGAS, Nevada (Saturday, September 5) – Phoenix Rising FC (7-2-2) extended its lead in the Group B standings to five points thanks to a 2-0 win on the road vs. Lights FC tonight at Cashman Field. Junior Flemmings scored his league-leading 11th goal of the season and Rufat Dadashov put the match to bed with his eighth of the year just before the final whistle.

Rising returns home to Casino Arizona Field next Friday, September 11, where it will welcome fans back for the first time since March 7.

Both teams felt one another out through a defensive first half. Phoenix controlled large portions of the first 45 minutes and held a 58-42 advantage in possession but was unable to create any clear-cut goalscoring opportunities.

Dadashov finally unlocked Vegas’ defense with a one-touch pass to Flemmings in first-half stoppage time. The golden boot leader took the pass and darted through the middle of the Lights FC defense before being hauled down from behind by defender Mobi Fehr, who happily accepted a yellow card for the tactical, goal-saving foul.

Solomon Asante drove a cross into the area from Phoenix’s right flank, just seven minutes into the second half. The pass appeared to be on target to a teammate making a run towards the back post, but Vegas defender Bryan de la Fuente attempted to intercept the pass in the middle of the area. Unfortunately for de la Fuente, the ball skipped up on the wet turf and clearly caught the defender’s left arm, forcing referee William Hoffman to point to the spot.

Flemmings stepped up to take the penalty, opting to shoot low to the goalkeeper’s left side. Vegas goalkeeper Thomas Olsen guessed correctly and got a hand to the shot, but could not keep it out of the net. The ball deflected up, off the post and shot back across goal into the opposite side netting to make it 1-0.

Vegas made two changes in the 67th minute and nearly leveled the match on a corner kick in the 69th minute. Fehr played a cross to the back post for Rashawn Dally. The forward picked out the far side netting and headed a textbook shot low but Rising goalkeeper Zac Lubin got across his line to push the attempt wide of the post.

Vegas pushed forward in search of a goal late but Asante broke free on a counter attack deep into stoppage time. Asante cut into the six-yard box with the ball but pushed his shot wide of the post after a challenge from behind forced the 2019 league MVP to hurry his attempt.

Rufat Dadashov put the game away a moment later. On the ensuing goal kick for Vegas, Jordan Schweitzer stepped up to win the 50/50 ball and quickly passed it forward to Dadashov. Phoenix’s No. 9 didn’t hesitate at all, turning and firing a hard shot low and to Olsen’s right side to make it a 2-0 final.