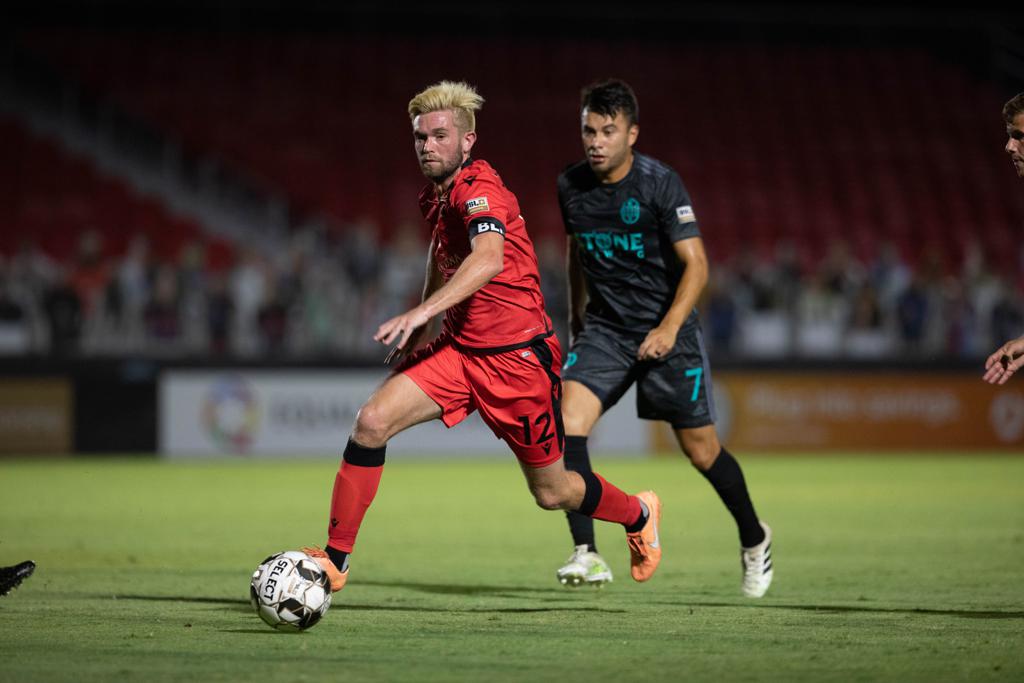 Rising began the match on the front foot, out-possessing a Loyal side that has built its early reputation on owning the ball. Phoenix earned four corners and produced four shots in the first 22 minutes of the match.

The breakthrough came in the 26th minute, when Jon Bakero knocked a short pass to Flemmings in the final third of the field. Flemmings took a short touch inside and ripped a shot towards the crossbar. The right-footed blast was too much for San Diego‘s Jake Fenlason. The goalkeeper dove to his right side, but the long-range shot was as well placed as it was well struck, tucking inside the post to give Flemmings his eighth goal in six matches.

Rufat Dadashov tested Fenlason again just after the water break. The striker chested down a ball played into him with his back to goal, turned right, around his defender and caught the ball on the volley. The dipping shot looked as if it would slip under the bar but Fenlason got a finger to the shot to tip it over and out for a corner.

Darnell King became the second Rising defender to find the back of the net in two matches when he gave Phoenix a 2-0 lead in the 59th minute. The San Diego defense was pushed back, well inside their own box after Solomon Astane and Bakero combined on the right flank. A centering pass was half-cleared by a San Diego defender, but the ball made it just outside the box, where King pounced on the opportunity to have a strike. The defender hit a shot with his first touch, placing it low and in the corner, for his first goal in a Rising kit.

Rising goalkeeper Zac Lubin put up a candidate for save of the week in the 73rd minute, when a cross played in from Rising’s left side was redirected on goal. The header happened just a few feet in front of Lubin, giving the goalkeeper little time to react, but he was equal to the task, parrying the shot away to keep his clean sheet intact.

Lubin finished the match with five saves to earn his second shutout of the season.

We played against a really well coached team. They’re very organized. They make it so difficult for you with their midfield rotation. We knew, being at home, we had to go press them and not let them dictate the game and have the ball.

We just need to worry about LA Galaxy II on Wednesday. We have a short rest and then a second one on Saturday so right now it’s all about recovery.

On his first goal for Rising FC…

It feels great. I wish the fans were here. I know they’re watching at home. We love you guys and it feels great to get a goal.

We were pressing high. Our guys reacted in the box. I was in the right place at the right time to follow up and I smacked it into the back of the net.

On getting a clean sheet tonight…

It was very important to us. It had been a while since we got one. It was one of our main focuses. We did a great job. Joey Calistri on the right, we all held our own. We had a couple spills here and there but Zac [Lubin] reacted well to the one, saved it.

On getting a clean sheet…

It feels really good. We’ve struggled keeping clean sheets this season. We’ve done well defensively but I feel like I’ve given up some soft goals. The number one goal tonight was the clean sheet and that’s what we did. We know the guys up top will score. They’re just playing at a different level. For us, the focus was on the back line, getting a clean sheet and get the people a free car wash [@RaceWayCarWash].