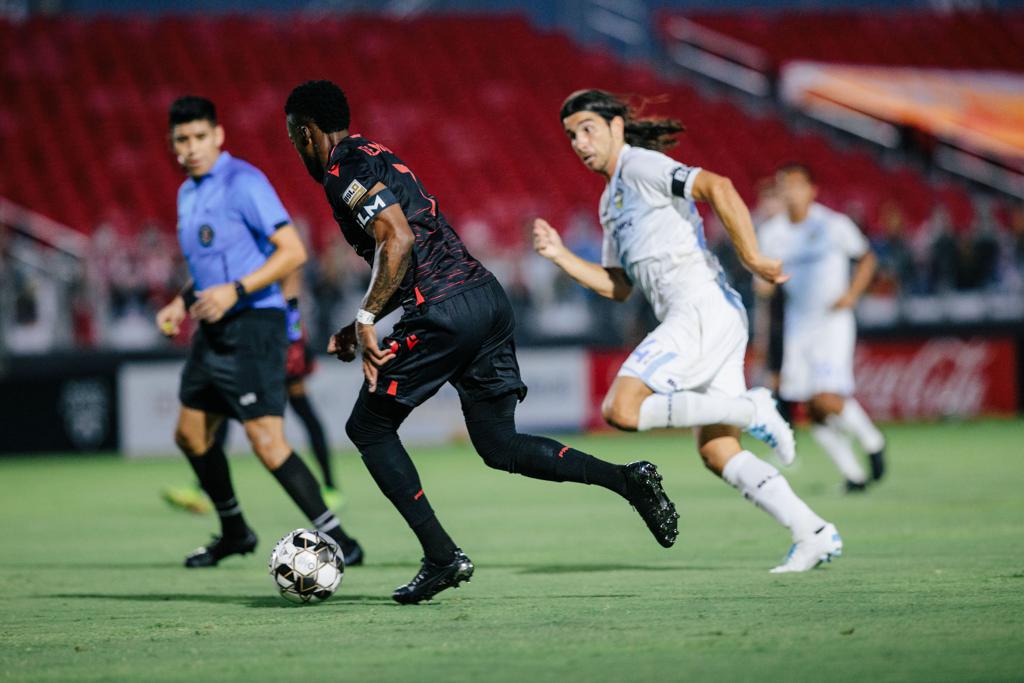 Making his first start of the season, goalkeeper Eric Dick made a save at the near post in the 13th minute after El Paso forward Aaron Gomez accepted a pass on the left flank, turned his defender and got off a hard shot. Dick slapped away the chance and pushed a second quick, rebound shot out for a corner kick.

Two-minutes later a through ball from Dylan Mares split the Rising FC defense. The pass found Gomez in alone against Dick. The goalkeeper arrived a second late, catching a piece of the shot by Gomez, but the attempt trickled through and made its way into the empty net.

Sam Stanton earned a penalty kick in the 18th minute, when he took a pass from Junior Flemmings, just as he was entering the area. Stanton reached back to collect the pass from Flemmings, which threw off the timing of his marker. Arriving late, the defender clipped the foot of Stanton, forcing referee Alan Martinez to point to the spot.

Rufat Dadashov stepped up to take the kick, beating goalkeeper Logan Ketterer low to his left side to make it, 1-1, in the 19th minute.

Just after a water break, Flemmings won a duel on the left side and played a centering pass to Dadashov. The forward found time to pick up his head and he delivered a perfect pass into the space in front of Solomon Asante. The reigning league MVP charged towards goal and curled a shot past Ketterer and into the far side netting to make it, 2-1, in the 36th minute.

Flemmings nearly made it 3-1 in stoppage-time of the first half, when Dadashov recovered a bad touch made by an El Paso defender. Flemmings took a pass from Dadashov and cut to his left, around a defender and smashed a hard shot to the front post. Ketterer stood his ground and punched away the chance.

The Jamaican got one more chance before the half and did not disappoint. Collecting the ball near the corner flag, Flemmings turned two defenders inside-out before crushing a shot, high over the shoulder of Ketterer to make it, 3-1, at the break. The highlight-reel goal was Flemmings fourth of the season, tying him for the team lead with Dadashov and Asante.

El Paso pushed Phoenix Rising in search of a goal to get back in the game at the start of the second half. Rising center back A.J. Cochran made an outstanding slide tackle to deny a goal-scoring opportunity by Omar Salgado in the 57th minute. Dick made three saves in short secession to keep the score, 3-1. The goalkeeper’s best came in the 62nd minute when Drew Beckie’s left-footed shot from the left side of the area was pushed, just wide of the back post with a kick save from Dick.

Following the water break near the 75th minute, Rising returned with a calm presence and controlled possession and the pace of the match, steering the 3-1 victory home to move into second place of the Group B table with 10 points.