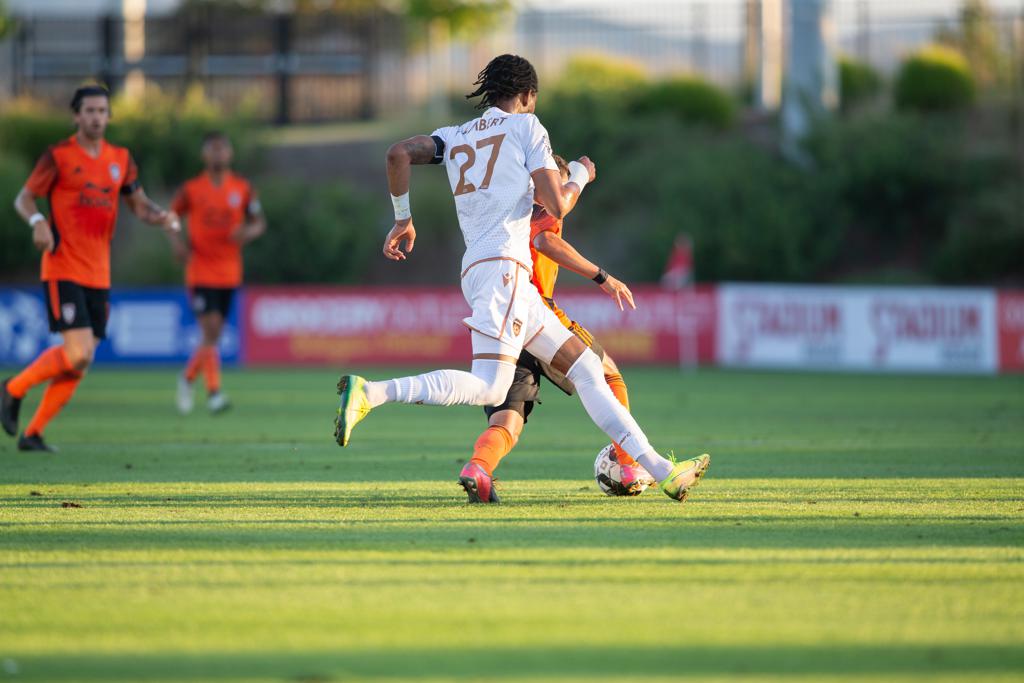 Darwin Jones nearly gave Orange County a 1-0 lead in the 13th minute, when a through ball required a quick decision from Rising goalkeeper Zac Lubin. The goalkeeper charged off his line to cut down on the striker’s angle and Jones attempted to poke the ball around Lubin at the top of the area. Jones cut left around Lubin but fell to the ground when he tried to turn back to collect the ball, preventing Orange County from taking an early lead.

Aodhan Quinn found some space in the middle for Orange County and played a well-placed through ball to Sean Okoli in the 20th minute. The 6-1 forward outmuscled his marker to win the 50/50 ball and moved to his left before firing a left-footed volley beyond the reach of Lubin to make it 1-0.

Junior Flemmings earned a free kick for Phoenix in the 38th as Rising regrouped following a hydration break and started to control the pace of the match. The set piece produced a look for Santi Moar, who was making his first start of the season, but the forward hammered a shot well over the bar.

Rufat Dadashov unlocked the Orange County defense with a back-heel flick after receiving a pass from Kyle Bjornethun in the 43rd minute. The pass from Dadashov put Flemmings in on goal and the Jamaican chipped goalkeeper Frederick Due. Moar beat his defender to the ball but caught the underside of the crossbar with his shot and the attempt somehow stayed out of the goal.

Moments later, the task became much more difficult for Phoenix as Moar was shown his second yellow card of the half and Rising were forced to play the remainder of the match with 10 men.

Things got worse for Rising in the 60th minute when a ball played into the area hopped up and caught the left arm of Darnell King, prompting referee Michael Radchuk to point to the spot. Quinn stepped up to take the spot kick but the midfielder’s plant foot slipped on the subpar pitch and his shot flew over the crossbar to keep it a one-goal game.

Lubin made a diving save to his right side to deny Okoli of a brace in the 67th minute. Following the save, Phoenix pressed forward with its three second-half substitutes – Lagos Kunga, Sam Stanton and Jack Barmby looking to push the pace of the match with fresh legs.

Despite being a man down, Rising earned a corner kick near the 80th minute as Phoenix battled in search of an equalizer.

Chandler Hoffman had a chance to put the match away for Orange County in the 87th minute but Corey Whelan made a goal-saving slide tackle to deflect the forward’s shot wide of the post.