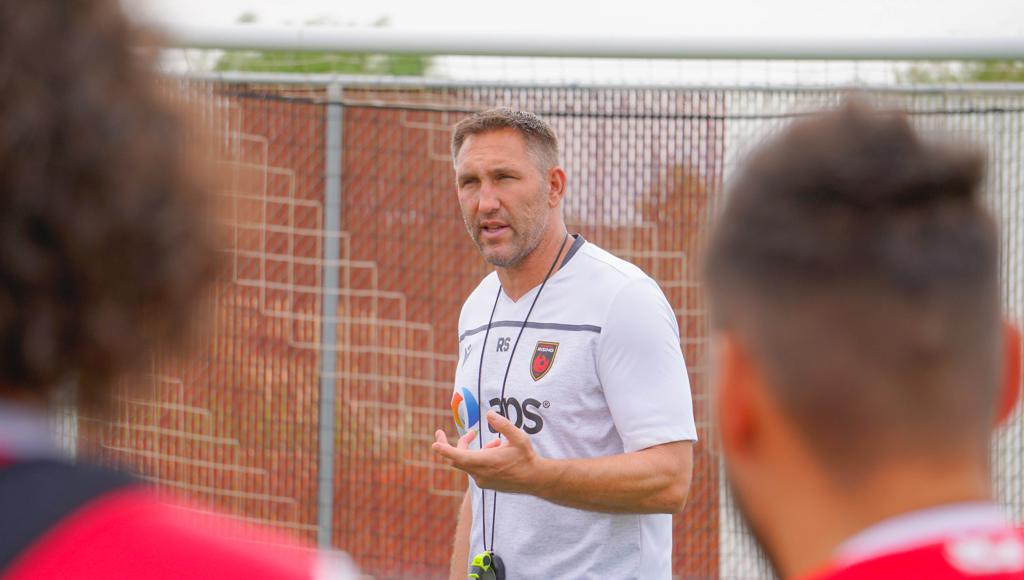 In the first of three meetings with Orange County SC last Thursday, July 16, Rising forward Junior Flemmings continued his hot streak by scoring his third goal of the season in the 64th minute. The home side countered 10 minutes later when substitute Kevin Coleman found the back of the net, but the 1-1 draw put Phoenix Rising (2-0-1) atop the Group B standings.

Rising FC head coach Rick Schantz spoke to media this week about the team’s disappointment with the point on the road.

“They’re upset… today [Tuesday at training] the competition was unbelievable,” said Schantz. “Anytime you are winning a game on the road and give up a goal to tie, it feels like you’ve dropped points. A result like that makes the guys that didn’t dress or didn’t play feel like they have a chance to play the next week. They’re going after each other hard and work ethic is our key value. The guys that are putting in a shift every day – those will be the guys that play.”

The goal was only the second allowed by Rising this season, but Orange County had several looks at goal that stemmed from long passes throughout the match.

“What we did learn is on all through balls, we have to see them through,” said Schantz. They had three-or-four blind long balls that stayed in play. The balls will check up. They’re not going to run out of bounds like they would here at Casino Arizona Field.”

On offense, the three players that combined for Rising's goal against Orange County - Flemmings, Soloman Asante and Rufat Dadashov are all tied for second in the league with three goals apiece. The trio will continue to be the focal point of the attack in Saturday’s rematch, but Schantz will need to go to his bench to replace Owusu-Ansah Kontoh, who picked up a red card for a tactical foul late in the match vs. Orange County last week.

“There is competition at every position at Phoenix Rising,” said Schantz “I feel good about the player coming in to replace Kontoh.”

FRESH
Orange County opened the 2019 season with six new players in its starting lineup. The match vs. El Paso ended, 0-0, in front of a crowd of 3,188 at Championship Soccer Park.

FAMILIAR
Thomas Enevoldsen rejoined OCSC for the 2020 season. He scored 20 goals for the team in 2018. The Danish International has 11 International Caps and one goal. Enevoldsen spent time between Sacromento and Indy Eleven last season, scoring 15 goals in 35 matches. He was not available for the match on 7/16.

OFFENSE
Rising leads The Championship in goals scored with 11.

TAKING YOUR CHANCES
Rising's three main threats, Asante, Dadashov and Flemmings had an outrageous 0.695 shots/shots-on-goal percentage heading into last match. The trio dipped in the 1-1 draw, putting two of 11 shots on taregt to lower their ratio to 0.514.

HATTY
Soloman Asante scored a hat-trick in a match vs. Orange County on August 11, 2018. Three goals in one game remains a club record for Phoenix. Rufat Dadashov repeated the feat earlier this season while Chris Cortez was the first to do it on March 24, 2018 vs. OKC Energy FC.

CREATORS
Jon Bakero led the league in chances created with seven heading into week four, but Soloman Asante doubled his season output (6) last week to move into first place in the league with 12. Junior Flemmings is tied for 16th with six. No other team in The Championship has two players in the top 10.