Phoenix moves atop Group B standings 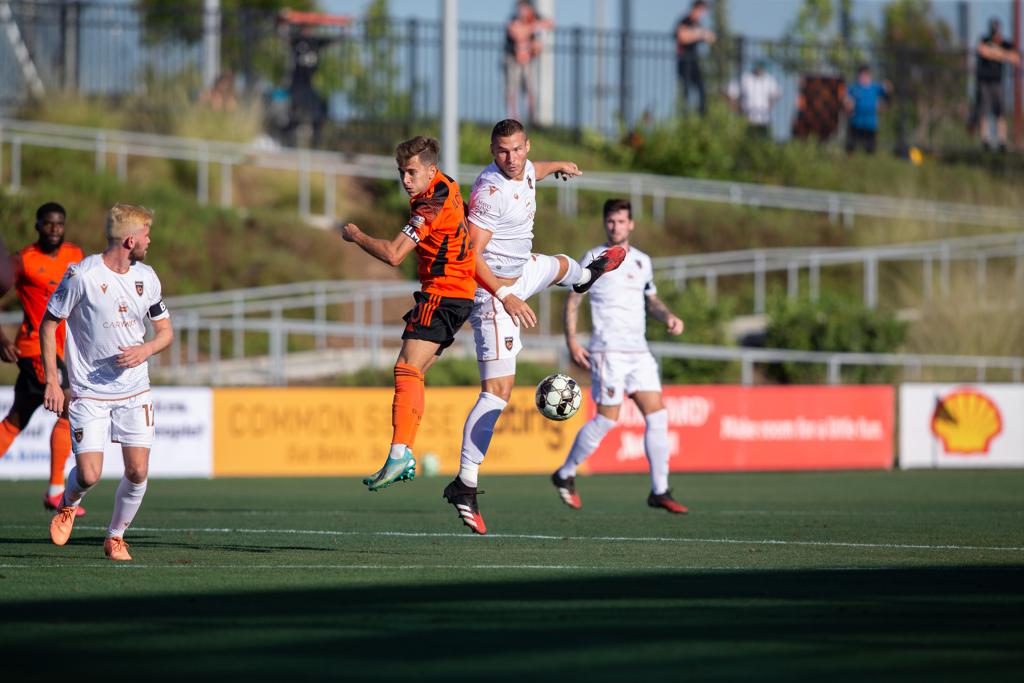 IRVINE, California (Thursday, July 16) - Forward Junior Flemmings scored his third goal of the season in the 64th minute, but Orange County pulled one back when Kevin Coleman found the back of the net in the 74th minute as Phoenix Rising (2-0-1) moved atop the Group B standings with a draw on the road tonight at Championship Soccer Stadium.

Phoenix won the possession battle 55-45 during a first half that saw Rising take nine shots to Orange County’s six, but defenders on both sides dominated the first 45 minutes, with neither team getting a shot on goal. Rising’s best chance of the half came just before the break, when Soloman Asante found Junior Flemmings at the top of the area. Flemmings got off a half chance while under pressure, but the shot was blocked and soared over the endline for a corner kick.

On the ensuing kick, Rising defender A.J. Cochran out-muscled his marker and got off a header to the near post. The shot had Orange County goalkeeper Aaron Cervantes beat, high to his left side, but the chance rattled off the crossbar before being ushered away from danger by an Orange County defender.

Phoenix began the second half on the attack and produced three corner kicks before the 54th minute. Ten more minutes passed before Darnell King earned Rising’s fourth corner of the half and seventh of the match, but it proved to be noteworthy as Asante’s outward-bending cross was redirected across the area to Flemmings at the far corner of the six-yard box. Flemmings reacted instantly to the touch by Dadashov and poked a chance towards the back post that floated just under the bar to give the visitors a 1-0 lead and Flemmings his third goal of the season.

Orange County answered in the 74th minute when a long ball played over the top was brought down by second-half substitute Kevin Coleman. The forward brought down the long pass in plenty of space and hammered a shot past Rising’s goalkeeper Zac Lubin’s right side to make it 1-1.

Deep into stoppage time, Darwin Jones came free behind the Rising back line and was in-alone on goal. Owusu-Ansah Kontoh ran down the opposing forward just before he got to the area and clipped his heel to potentially save a goal. Kontoh, as the last defender, was shown a red card for a tactical foul and will not be available for next weekend’s tilt, also against Orange County in Irvine, California. Fortunately for Rising, Lubin made a save on the ensuing free kick to preserve a point on the road for the Group B leaders.