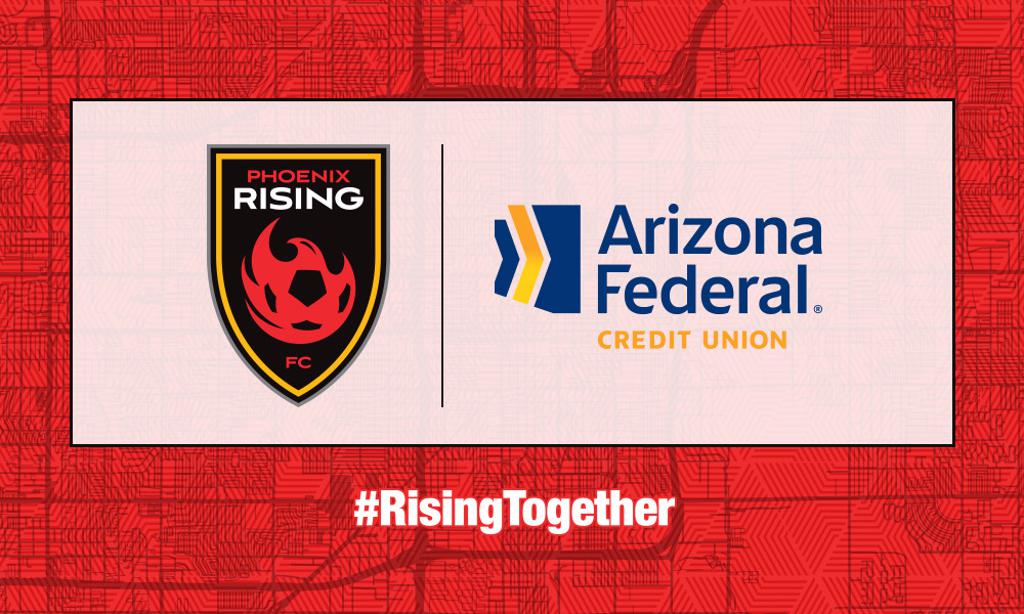 PHOENIX (March 5th, 2020) — Locally-based financial cooperative Arizona Federal Credit Union (AZFCU) announced today its partnership renewal as the official and exclusive credit union of the Phoenix Rising Football Club. Building on a previous three-year engagement, this new agreement will extend the credit union’s relationship with the soccer club for the 2020, 2021 and 2022 seasons.

With a dedicated and growing fanbase, Phoenix Rising has built a solid reputation in the Valley because of their hyper-local focus on building strong relationships with the community and fans that support them, specifically their young fans. AZFCU quickly identified and aligned with their mission and sought the partnership back in 2017 to bring awareness of its financial products and services to the team’s fan base, and use as an opportunity to promote financial literacy for the youth soccer fans in the Valley.

“One of our core missions at Arizona Federal is to set our youth on a path to good money management skills,” says Jason Paprocki, EVP & Chief Opportunity. “Phoenix Rising has embraced this mission with us and allowed us to interact with young fans at matches and soccer camps to educate them about financial literacy and our Club Rising accounts and for that we are grateful.”

“Arizona Federal Credit Union has been a tremendous partner of Phoenix Rising FC since our inaugural season and we are delighted to extend our relationship with them for another three years,” says Bobby Dulle, General Manager.  “As an Arizonabased cooperative that is committed to the local communities, we will continue to work with them to educate younger consumers on financial based initiatives.”

“In a short time, Phoenix Rising, its players and leadership has created a true sense of local pride here in the Valley through their engagement with the community to create a top-notch sporting experience,” says Jason Paprocki, chief operating officer and executive vice president at Arizona Federal Credit Union. “As a member-owned local credit union, we understand the importance of this ‘community first’ approach which is why we felt this was the ideal partnership for Arizona Federal.”

About Arizona Federal Credit Union
Arizona Federal is a $1.9 billion not-for-profit, local cooperative providing financial services and expertise to more than 130,000 member/owners. Founded in 1936, the credit union empowers members to take hold of their financial future through the delivery of leading-edge self-service tools and mobile apps, competitive rates on loans and deposits, robust home loan solutions, small business services and commercial loans, identity protection services, and annual member payouts when the cooperative does well. Arizona Federal has a history of local community involvement and is the sponsor of the LiveNation Theatre venue and exclusive credit union partner of the Phoenix Rising FC. The credit union has 16 locations across the Phoenix metropolitan area. Deposits are federally insured by the National Credit Union Administration. For more information: ArizonaFederal.org