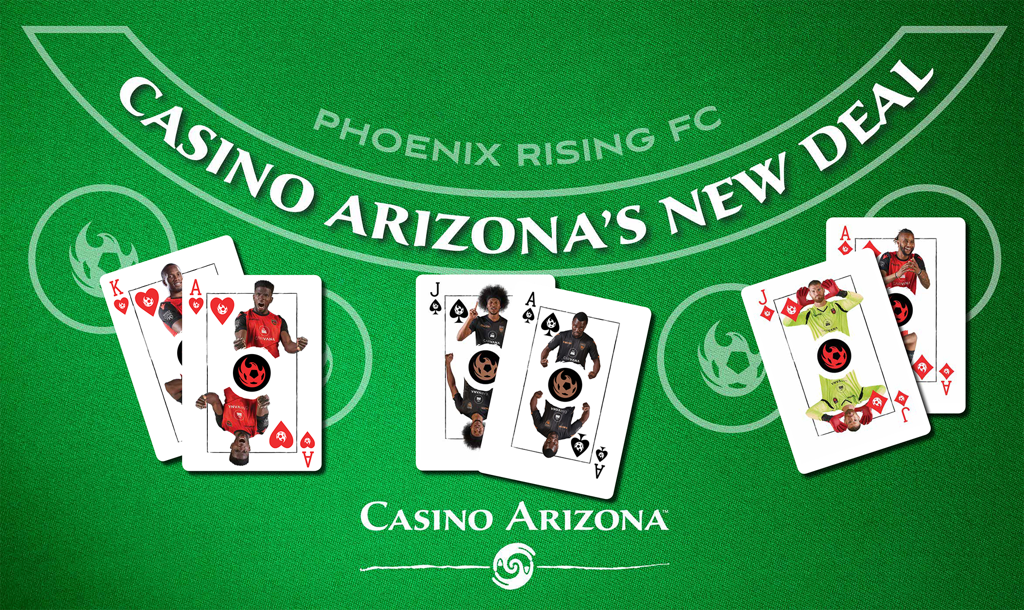 (PHOENIX) March 15, 2019 – Phoenix Rising FC and Casino Arizona, an enterprise owned and operated by the Salt River Pima-Maricopa Indian Community (SRPMIC), announced today a multi-year contract for naming rights of Phoenix Rising Sports Complex. As part of the new deal the team’s stadium will now be known as Casino Arizona Field. The new name will be reflected throughout the stadium at the 2019 home opener against the New Mexico United on Saturday, March 16.

“It is a great honor for Phoenix Rising to partner with Casino Arizona, an iconic entertainment destination in the Valley,” said Berke Bakay, Governor of Phoenix Rising FC. “We have had a wonderful relationship with the Salt River Pima-Maricopa Indian Community, and its member families of the Solanna Group who own the land where our stadium resides, since our launch in 2016. Our stadium is located in close proximity to Casino Arizona, also making this agreement a natural fit.”

Beyond the naming rights for the stadium and pitch, the partnership between Casino Arizona and Phoenix Rising FC includes logo branded signage throughout Phoenix Rising Sports Complex. Inside the stadium, Casino Arizona and its sister property, Talking Stick Resort will have dual logos on barricades around the pitch, while banners in the stadium, the scoreboard and the team’s practice field will now feature the new name of the field. Another new addition to the stadium this season will be a permanent monument sign that will also brandish the Casino Arizona Field name and will be installed at a later date.

“Casino Arizona has long maintained a reputation for supporting major sports in the Valley, and Phoenix Rising is among the most exciting teams to watch,” said Ramon Martinez, director of public relations for Casino Arizona. “We are proud to be associated with these 2018 Western Conference Champions and to be represented in their stadium.”

Phoenix Rising FC will play its first game on its newly appointed Casino Arizona Field on Saturday, March 16 at 7:30 p.m. Fans in attendance will enjoy all of the soccer action they have come to expect from the reigning 2018 Western Conference Champions of the USL Championship league. They also will have access to a collection of giveaways including magnets, shirts and posters as they enter the stadium.

About Casino Arizona
Located in Scottsdale, Ariz. at the Loop 101 Freeway and McKellips Rd., Casino Arizona is independently owned and operated by the Salt River Pima-Maricopa Indian Community, and offers visitors more than 100,000 square feet devoted to gaming, dining and entertainment. Visit www.casinoarizona.com for more information.